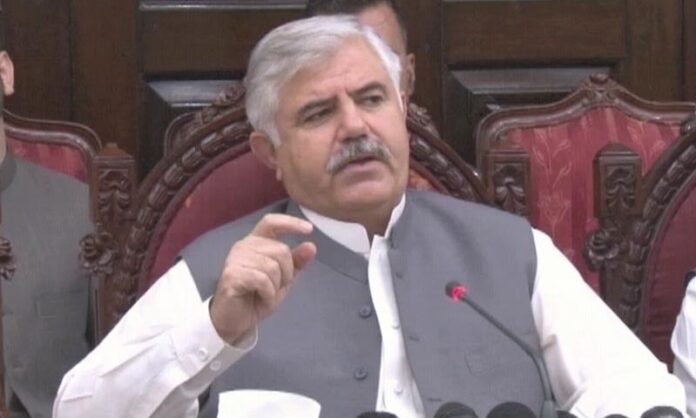 He was addressing the public after the ground breaking ceremonies of Makh Banda Dam project and the rehabilitation of a 38km long road from Banda Daud Shah to Gurguri during a one day visit to District Karak on Tuesday.

The chief minister said that oil and gas royalty funds were the right of people of Karak and other oil producing districts, adding that the incumbent government, as per the vision of Prime Minister (PM) Imran Khan has launched the Karak Area Development Project to ensure that the royalty funds are spent the people of Karak.

“Various developmental schemes worth billions are being spent in education, health, public health engineering, communication and other social sectors for the sustainable development of the district”, he said.

The chief minister said that more than Rs9 billion would be spent on various developmental projects during the next four years and added that each and every penny of oil and gas royalty funds would be spent on districts contributing to the production.

Similarly, he said that work on the dualisation of Bannu road has also started, which would be completed at an estimated cost of Rs4 billion out of which Rs2 billion had already been released.

Highlighting other developmental projects for district Karak, the KP chief minister said that work on upgrading existing healthcare facilities in the district was underway whereas a major teaching hospital was also being established in the southern region.

He said that Rs405 million have been allocated for the execution of various road projects in the district in the current financial year whereas Rs550 million were allocated for the construction of sports complex in Karak.

Terming the Peshawar to D.I. Khan motorway project of vital importance for the country’s southern districts, the CM said that the project would be completed with the estimated cost of Rs260 billion

The KP CM concluded by saying that the extension of Sehat Card Plus would also be launched for the area by the end of January, after which the people of southern districts would get free healthcare facilities upto Rs1 million per house hold per annum.