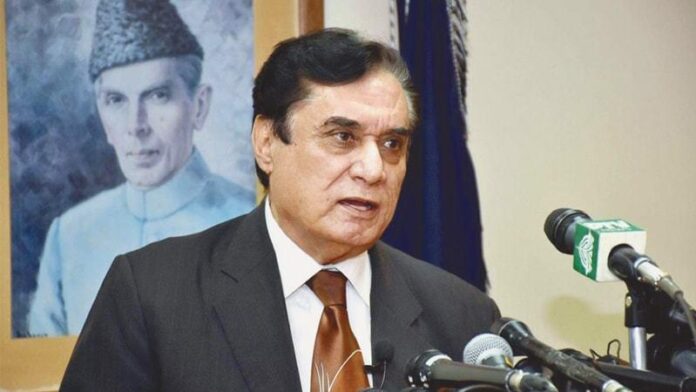 National Accountability Bureau (NAB) Chairman Justice (r) Javed Iqbal has said that an amount of Rs487 billion has been recovered from corrupt elements over the last three years.

Addressing the traders on Tuesday, the NAB chief said that 1,235 references were currently pending before different courts, “but not even one per cent of them were against businessmen”.

Iqbal maintained that NAB was no longer pursuing tax cases against the business community, adding that facilitation of the traders and businessmen was one of his top priorities.

The NAB chairman, however, said corrupt elements would not be spared. “There’s a difference between a business and a fraud. We prioritise the interests of the businessmen and will take steps to address their issues.”

He said billions of rupees have been recovered from illegal housing societies and returned to the affectees.

Iqbal regretted the propaganda campaign against the anti-graft watchdog but said that it would continue to perform its duties honestly without any fear.

“No threats or blackmailing will be a hurdle in the way of the bureau [in taking action against those involved in corruption],” he said. “We have been accused of everything except [spreading] the coronavirus,” he quipped.

He said those involved in the propaganda were the ones facing some sort of inquiry or investigation by NAB.”

Iqbal maintained that those who think that NAB has filed a wrongful reference against them may approach the court. “NAB is also answerable…we can respond to those levelling accusations against them but we stay silent.”

The NAB chief noted that those who were earlier known as ‘untouchables’ were now being summoned by the bureau, adding that the law and order situation has improved in the country due to the sacrifices of the armed forces.