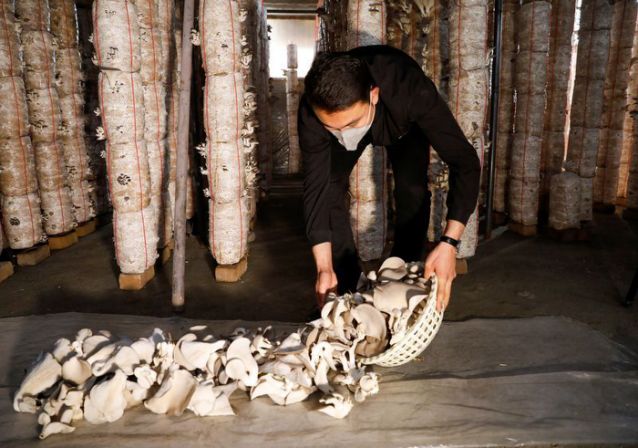 KABUL: At his farm in Afghanistan’s capital Kabul, Rasool Rezaie gently picks oyster mushrooms, part of the around 30 kg he sells in markets daily.

Rezaie learned how to grow mushrooms during a stay in Russia, and set up his farm two years ago.

“I was introduced to a mushroom farm in Russia by a friend, and I started working there, where I learned how to produce the mushroom spores and cultivate them,” said Rezaie, who first moved to Russia in 2012 due to insecurity and unemployment in Afghanistan.

In 2016 more than one million people, a quarter of them Afghans, applied for asylum in Europe, Rezaie among them.

His claim was rejected and he returned to Afghanistan, where he initially worked as a shopkeeper. But the memory of mushroom farming lingered.

“I said to myself ‘when I have experience of this profession, why shouldn’t I do it?’” he told Reuters.

He began by growing mushrooms in a single room in his own house, producing 4-5 kg for markets. Today, Rezaie said he earns about 4,500 Afghanis ($58) a day and is optimistic about his future.

He has even begun supplying spores to others looking to set up their own mushroom farms, a rare example of domestic farming in landlocked Afghanistan where seeds are usually imported.

Rezaie said mushroom-growing picked up during the coronavirus pandemic, with people looking for a new source of income as businesses shuttered.

Zakir Hussain Mohammadi, a vendor who sells about 10 kg of mushrooms daily at a local Kabul market, said interest from consumers was also on the rise.

Rezaie hopes other farmers too will grow mushrooms and change the image of Afghanistan as a global producer of opium.