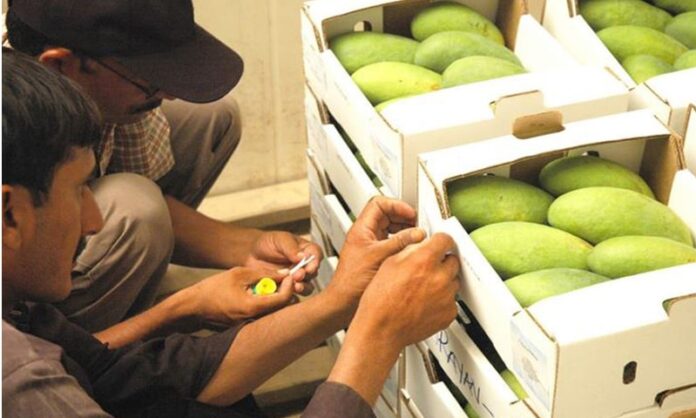 ISLAMABAD: The Australian Department of Water, Agriculture and Environment has approved two mango processing facilities of Pakistan, Mustafa Agriculture Farm in Kotri and Iftekhar Ahmed & Co in Karachi, for exports to Australia.

So far, only two facilities i.e. Horti Fresh and PARAS Foods were approved for import into Australia. Pakistan had filed the request for approval of three more facilities around five years ago.

Taking to Twitter to comment on the development, Advisor for Commerce Abdul Razak Dawood said, “I am glad to share that two mango treatment facilities in Pakistan, Mustafa Farm and IAC, have been approved by Australian authorities for export of Mangoes from Pakistan. This has been done just in time for the mango season. I congratulate the two companies of this achievement and commend the facilitation provided by our Consul General (Trade) @ashraf179 at Sydney in this regard.”

Meanwhile, despite the challenges posted by Covid-19 restrictions, Pakistan has set  an export target of 150,000 metric tonnes of mangoes during this season as demand for the king of fruits has increased in the international market.

As the export of mango commenced the body of horticulture exporters has set the major target as compared to the initial target of 80,000 MT set last year.

According to an announcement made by All Pakistan Fruit & Vegetable Exporters, Importers & Merchants Association (PFVA) here on Tuesday, the export of 150,000 metric tonnes of mango would fetch foreign exchange of over $127.5 million.

According to office bearer of the association, the export target was set as 80,000 tonnes last year keeping in view the negative impact on economy due to the pandemic and subsequent logistics challenges; however, due to an extra-ordinary demand of mangoes globally, the export was enhanced to 140,000 tonnes, generating $120 million in forex.

However, PFVA Head Waheed Ahmed informed Profit that on one hand, Pakistan’s Rs100 billion mango industry is facing serious issues of climatic changes and scarcity of water while on other hand, limited flight operations, restrictions by numerous destinations on flights and higher air freights are increasing the cost of export.

“Contrary to last year, the export of mangoes via sea this year is facing challenges due to shortage of reefer containers and high freight cost. Of the total export volume of mangoes, 55 per cent is exported by sea, 25 per cent by land routes and 20 per cent by air,” he added.

He said that the PFVA has urged the government to focus on the promising markets of Russia and China for exporting the king of fruits and also recommended to conduct mango promotions for wide publicity.

Further, he said that by following a realistic strategy, Pakistan can be included in the list of top three mango exporting countries of the world within a period of 4 to 5 years. “It is imperative to focus our attention on high value markets,” he said, stressing on the need for an extensive Research & Development (R&D) for getting easy access to markets which rely on quality and appearance of the fruit.

He emphasized that in order to accomplish the mango export target, cohesive teamwork, support, cooperation and co-ordination among all stakeholders including the Department of Plant Protection (DPP), Customs, sea and airport authorities is imperative.