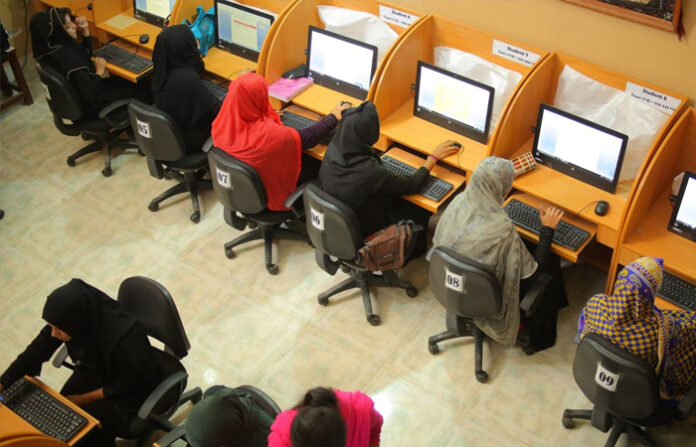 PESHAWAR: The Khyber Paktunkhwa Science and Information Technology (KPSIT) department has launched a new startup project to impart IT trainings to 25,000 people in the province for generating more employment opportunities.
According to details, the provincial government with the support of World Bank (WB) has spent Rs840 million to train 3,000 women which will help them start their own businesses in the province under the startup project.
Minister for Science and Technology, Atif Khan, said that practical steps are being taken to empower women economically.
Khan said the provincial government has so far completed training for 15 companies under the startup programme in which ten companies have been registered with the Security and Exchange Commission Pakistan (SECP). He said the science and technology department will train 25,000 more men and women in advanced digital scale in the next two years at a cost of Rs3 billion.
As per the KPSIT, 15 companies have completed training so far.
Furthermore, the provincial government will also create three special technology zones (STZs) to create employment opportunities in science and technology. The zones will be constructed in Mardan, Haripur and Peshawar districts.
Atif Khan said that in order to solve the problems of internet connectivity in tourist destinations, internet facility will be provided from universal service funds in collaboration with the federal government.
Karishma Zakaullah, owner of the Uni Desk Company, said that the training provided by the provincial government to women in IT sectors has created employment opportunities for other women. “Currently, women here have a 1 per cent share in business. After training, we have received Rs1.5 million in career scale training for school children,” he added.
Similarly, the owners of other companies have received total revenue of Rs20 million after completing training.
Atif Khan said that the digital training project will be launched in tribal districts at a cost of Rs1 billion as soon as security concerns and internet connectivity issues are solved.
- Advertisement -
Facebook
Twitter
Linkedin
WhatsApp
Email
Previous articleGovt elevates Dr Muhammad Ashfaq Ahmed to chairman FBR slot
Next articlePakistan to lag behind in smartphone usage, 5G coverage until 2025