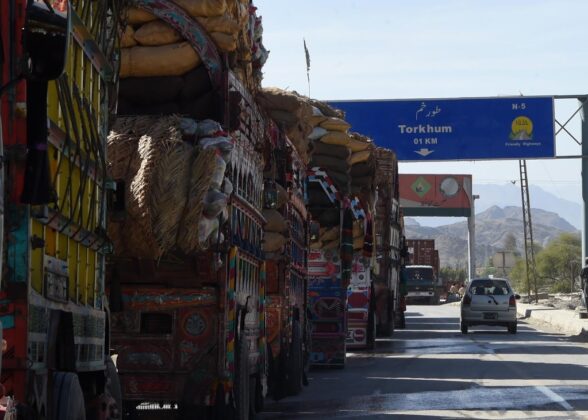 PESHAWAR: Exporters from Pakistan have resumed supplying goods to Afghanistan after more than three weeks of uncertainty in Kabul.

After the Taliban seized control of the Afghan capital on August 15, business was halted in major cities.

“For the last 20 days, I didn’t place any order in Pakistan because of fear that the situation could be worse when the Taliban began capturing major cities,” Afghan businessman Abdul Rahim Qazizai told Anadolu Agency.

“Now, I meet with my Pakistan counterparts and place orders for sugar and cooking oil,” he said while going to Kabul via the Torkham border after spending three days in Peshawar.

Hundreds of trucks lined the Khyber Pass, the main road connecting Pakistan and Afghanistan via the Torkham border, on Wednesday. They were full of food products waiting to cross the border toward eastern Jalalabad in Afghanistan.

Most drivers were waiting for three or four days near the border because of a lack of parking on the Afghanistan side. But the long queues provide a clear picture of economic activity resuming between the two countries.

“I am waiting here for the last three days and don’t know when my turn will come to cross the border,” said Nadir Shah, who was resting near his vehicle.

Shah’s vehicle was loaded with cement and was headed from Peshawar to Jalalabad.

A Pakistan customs official at the Torkham border, who asked not to be named because he was not authorised to speak to the media, said trade has increased in the last few days.

“Since earlier August, we observed that most trucks were going back to Afghanistan empty to bring vegetables, fruits, and minerals but now they are taking goods from Pakistan as well,” he said.

“We are facilitating these trucks and want to clear as soon as possible but due to lack of parking facilities on the other side of the border, these trucks are waiting here,” he said.

Minister for Interior Sheikh Rasheed Ahmed said on August 19 that the situation along the border is “normal,” and trade activities have been increased.

Figures from Pakistan’s customs showed the number of trucks moving across all border points reached 1,123 on August 17 from 475 on August 15.

The trade volume between Pakistan and Afghanistan dropped during the last decade from $1.5 to $2 billion to $754 million in 2020, due to tense relations between former Kabul governments and Islamabad, trading accusations of providing a haven to terrorists.

But it slightly increased in the current April — July period to $869 million after Prime Minster Prime Minister Imran Khan visited Kabul last November, according to the Commerce Ministry data.

Drivers said the situation has changed since the Taliban seized areas along the Torkham border and now they were not paying bribes for permission to pass.

“Earlier, the Afghan officials at the border and also at different check posts demanded bribes ranging between Rs10,000 to Rs20,000 [$60 to $120] to allow our vehicles in their respective areas,” said Abdullah, a truck driver from Khyber district, a bordering district with Afghanistan.

“Now, in last 20 days, no one has asked me to pay a bribe at the border or any check post,” he added.

Taliban spokesman Zabihullah Mujahid said last week that businesses resumed across the country and the group assured the business community that they would be secured.

“Now business resumed and we assure all the business community that we will provide full security to them,” Mujahid told reporters in Kabul.

The business community, while welcoming the assurances of security, said it wants the new government to provide more security at the border.

“Our bilateral trade with Pakistan could enhance to $5 billion, but both governments need to remove the hurdles at borders and facilitate us,” said Qazizai.