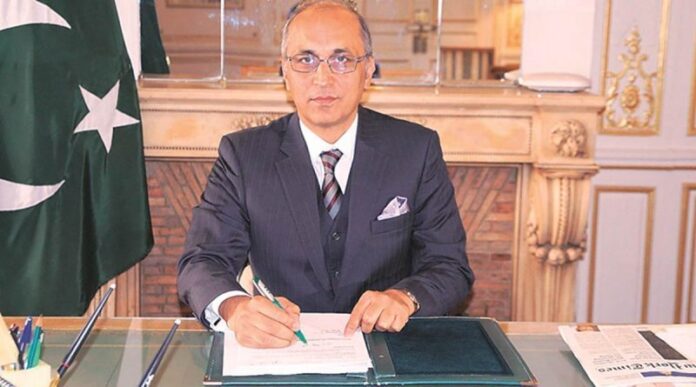 BEIJING: “Pakistan’s exports to China are expected to double in the next two to three years as a result of the second phase of the China-Pakistan Free Trade Agreement (FTA) and other measures taken by the two governments to enhance bilateral trade,” Pakistan’a Ambassador to China, Moin ul Haque, said on Tuesday.

“During the first six months, Pakistan’s exports to China surged by more than 80 per cent despite the ongoing COVID-19 pandemic, which has affected global trade and travel,” he said in an interview.

Statistics from the Ministry of Commerce indicated that during the first half of this year, Pakistan’s exports to China hit $1.73 billion, up 83 per cent year-on-year (YoY).

During the same period, bilateral trade increased to $12.6 billion, up 63 per cent YoY.

Haque attributed the momentum to the second phase of the China-Pakistan FTA, which was signed in 2019, and also to China’s incentive to boost imports including the China International Import Expo and Pakistan’s six pavilions at leading trade expos in China, Pakistan’s active presence on China’s leading e-commerce portals, and China’s booming economic zones in Pakistan.

As part of the second phase of the free-trade agreement, China, which is Pakistan’s largest trade partner, removed tariffs on more than 300 Pakistani commodities, including agricultural products and textiles, bringing the total number tariff-free goods to 1,000.

“China has a particular system to boost imports, which is unique in the world, such as its China International Import Expo; and our country has set up online shops on China’s e-commerce platforms like Alibaba, Taobao and JD, all new impetus for us to hold great confidence in exports,” the ambassador noted.

In addition, he lauded the China Pakistan Economic Corridor (CPEC), which has entered its second phase of quality development this year.

“The CPEC has transformed Pakistan’s landscape and in particular, improved infrastructure for us, and as a result it will benefit China, Pakistan and the region,” he said.

The latest developments include construction of the western branch of the CPEC, which began this year and is expected to be completed in the next three years. The electricity transmission grid part of the CPEC also began commercial operations this year.

“The last three years have seen difficulties in the grid in the area, but since this year, it has improved electricity production and transmission,” he noted.