NPMC takes notice of rising prices of wheat in Sindh, KP and Balochistan 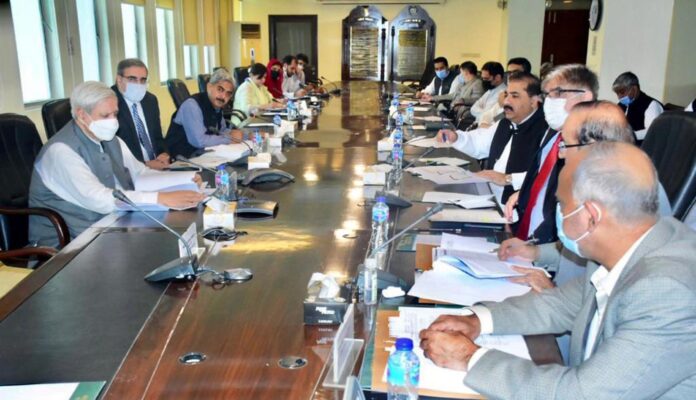 ISLAMABAD: The National Price Monitoring Committee (NPMC) meeting on Wednesday directed the provincial governments of Sindh, KP and Balochistan to release wheat at the notified price on top priority.

The meeting was held under the chair of Federal Minister for National Food Security & Research, Syed Fakhar Imam, who stressed upon the need to start daily release of wheat at the government notified price to ease pressure on prices of wheat flour throughout the country.

The economic adviser Finance Division briefed the NPMC about the increase in weekly SPI by 1.21 per cent as compared to the consecutive decline over the last two weeks. Prices of 21 items remained stable whereas eight items registered a decline during the week under review.

While taking stock of the situation, the NPMC observed that the price of a 20 kg bag of wheat flour was Rs1,100 in Punjab and Islamabad Capital Territory (ICT) due to daily release of wheat at government specified price; however, the same ranged between 1300-1460 per bag in Karachi, Quetta and Peshawar.

Sindh secretary Food informed the meeting that the provincial government will start daily release of wheat at the notified price with effect from October 16, adding that there were sufficient stocks of wheat with the provinces and PASSCO.

The NPMC was also informed about the start of voluntary crushing of the sugarcane in some districts of Sindh by October 25 as well as the provincial government’s intent to begin sugarcane crushing by the first week of November.

It was informed that imported sugar is being provided to Sasta Sahulat Bazaars and Utility Stores Corporation (USC) at a subsidised price of at Rs90 per kg in order to provide relief to the consumers. “The early crushing of sugarcane will further reduce the prices of sugar in local markets,” he added.

The committee was briefed about the continuous fluctuations in the international prices of Palm and Soybean oils. In this reagard, FBR has worked out an arrangement with all relevant stakeholders and a proposal will be submitted before the Cabinet to reduce duty on import of edible oil which will reduce the prices of ghee in local markets.

Moreover, the meeting was informed about the increase in prices of chicken due to seasonal factors. It was stated that the opening of restaurants and banquet halls have pushed the demand for increased consumption of chicken and prices will be streamlined with improved supply in a few weeks.