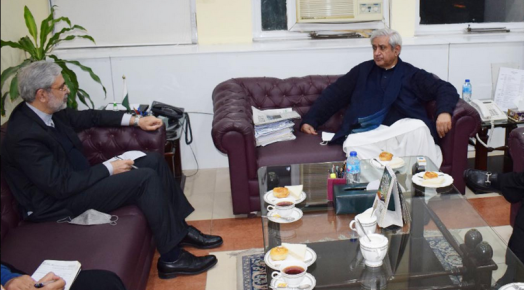 Talking to Ambassador of the Islamic Republic of Iran to Pakistan Syed Mohammad Ali Hussaini, who had called on the him, Imam said that Pakistan can meet Iran’s entire demand of rice as it has 8 million tonnes in surplus.

“Pakistan faces a number of challenges but with the right policy interventions under the leadership of Prime Minister Imran Khan, the agriculture sector is transformed,” he said, adding that local agriculture has been tottering along traditional agricultural techniques and it is time to look ahead to the future in terms of modernisation.

Fakhar Imam praised the current governments efforts and said that in the last 70 years the main set back to research was insufficient funds. “This is the first time in the history of Pakistan that billions of rupees have been invested in agricultural research which has led to record production of wheat, maize and rice last year,” he said.

Speaking on the occasion, Seyd Mohammad Ali Hussaini said that Iran imports several agricultural products from Pakistan, and has a substantial market for livestock, red meat and fisheries.

He said that Iran and Pakistan should take advantage of their 900 km border to strengthen economic and trade relations with each other.