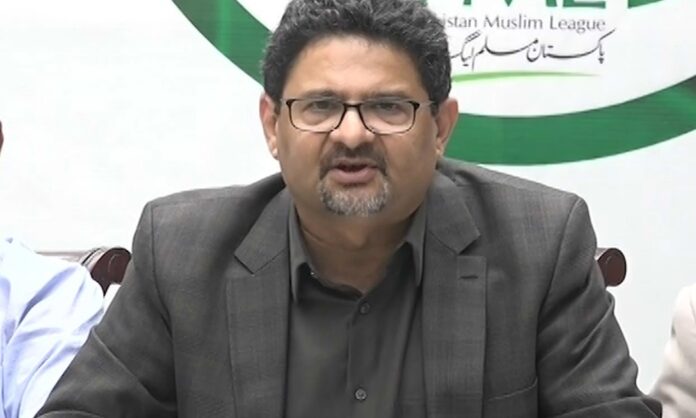 ISLAMABAD: Finance Minister Miftah Ismail on Tuesday while defending the hike in POL prices said that while he was an “easy target” for criticism, the government has not imposed tax of even a single paisa on petroleum products.

Finance Minister, who faced criticism from within his party and other cabinet members for hike in petrol price for the next fortnight, defended the decision stating that the price increase will not affect the supply and demand cycle.

While addressing a press conference here in the federal capital, he added that the PML-N government has averted default by taking difficult political decisions whereas efforts to put the economy on back on track are in full swing.

“I stand behind every decision of the government with full responsibility,” the finance minister said, noting that no economic decision was taken without his input.

It is pertinent to mention here that Miftah’s comments were closely preceded by PML-N Vice President Maryam Nawaz’s tweet claiming that Nawaz Sharif had “strongly opposed the decision to raise the price of petrol.”

“He even said that he couldn’t burden the people further; that he was not in favour of the decision, and also left the meeting,” she added.

She said her father stressed that he was not on board and that if the government was bound by some constraint, it should go ahead with the increase.

It is pertinent to note that under the deal with the International Monetary Fund (IMF), the government has to gradually increase PDL on oil products to a maximum of Rs50 to collect Rs855 billion during the current fiscal year.

It may be recalled that the PML-N was clean sweeped in the recent elections in Punjab whereas the PTI is all geared up for the upcoming elections with the Shehbaz-led government making continuous unpopular decisions.

Petrol prices could have been lowered had the government not committed to do the opposite in order to secure a loan from the IMF, however, the government does not have any choice but to fulfill all of the Fund’s demands.

On the other hand, PPP Co-chairman Asif Ali Zardari also criticised the incumbent government for increasing POL prices despite a massive appreciation in rupee value and a decline in international oil prices.

The former president said the PPP is a part of the government and supports it, but there must be consultations on such decisions. “We are all here in this government to give relief to the people and that should be our top priority. We are with the govt but such decisions should be taken together as a team,” he said.

Responding to the PPP leader’s comments during his press conference, Miftah Ismail said that he respects the PPP leadership and would address their reservations over the decision related to the prices of petroleum products.

However, the finance minister reiterated that it is OGRA that fixes a price every fortnight as this is how the system runs,” he reiterated. He also said that the current government has solved all of the country’s pressing issues.

The finance minister said that the price of petrol in India is Rs300 per liter while they have foreign exchange reserves of $600 billion and Pakistan have reserves of $10 billion.

“Similarly, Bangladesh has $35 billion of foreign exchange while petrol is being sold at Rs308 per liter because of global inflation. Our main criticism of Imran Khan is that he led us to the point where the country could have gone bankrupt. We are proud of that we saved Pakistan from bankruptcy by making political sacrifices,” he added.

He added that the government will soon tackle inflation, in which petrol and diesel have a major hand.

The finance minister said that Pakistan has a trade deficit of 48.3 billion dollars as the country’s imports totaled $80 billion while exports clocked in at $31.7 billion. “We will have to arrange $48 billion, out of which $30 billion will come as remittance from Pakistanis working abroad but we still need $20 billion.

Miftah also criticised the PTI government saying that in the last four years, they took a loan of Rs19,003 billion, which is equal to 79% of the previous 71 years.

“PTI did not make any long-term agreements in fuel, diesel besides our agreements with Qatar, Kuwait were still going on,” he added while maintaining that the current issues were a result of the previous government’s actions.

Earlier while responding to a tweet by journalist Hamid Mir, the finance minister argued that the price hike was imposed through a proper mechanism while the government did what it could to provide some cover to the masses.

“The increase or decrease in prices is according to the purchasing by Pakistan State Oil (PSO),” he said.

The Oil and Gas Regulatory Authority (OGRA) takes the average Platt prices, adds freight and the premium paid by PSO on top of these prices, and multiplies that by the exchange rate, he said.

1) A brief explanation on how petrol and diesel prices are set in Pakistan. OGRA takes the average of Platt prices, adds freight and premium paid by PSO on top of these prices, and multiplies that by the exchange rate. In addition it also “trues up” the previous fortnight’s cost https://t.co/Nho7dI4vxD

“We have not added any new tax or levy to the price. The price of petrol has gone up (and diesel has gone down) because the cost paid by PSO in the previous fortnight was more than the cost estimated by Ogra and also because the premium paid by PSO on petrol increased and [the] premium paid on diesel remained unchanged,” Ismail said.

“Again, not one paisa of new taxes or levies was added,” he said.

On continuous probing by Mir, the finance minister said that the summary was moved by OGRA and sent to the Finance Division through the Petroleum Division.

“We get it only a few hours before prices are set. I am an easy target. Which is fine. But this price change only reflects the change in PSO costs and doesn’t have any new taxes. People are welcome to critique or criticise me. I know I am sincere to my country and have saved it from default and [am] working to the best of my ability,” he added.

Resultantly, the ex-depot price of petrol was raised to Rs233.91 from Rs227.19, showing an increase of Rs6.72 per litre whereas the price of light diesel oil inched up by an inconsequential 43 paisa per litre to Rs191.75 per litre from Rs191.32 at present.