A bid by telecommunications companies to change their power tariff from commercial to industrial shot down, and they’re not happy about it 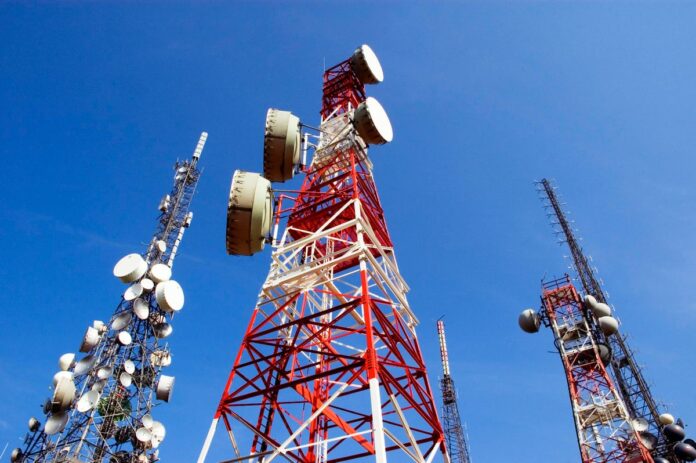 A plea by telecommunication companies for their power tariff to be lowered was recently dismissed by the country’s power regulator after protracted deliberations, which has sparked resentment among many in the IT industry who are questioning the merits of the decision.

The plea by the telecom companies was to change the category of the sector from commercial to industrial, which would have meant lower power tariffs. The demand was based on the argument that multiple laws consider the telecom sector as an industry, therefore, the National Electric Power Regulatory Authority (NEPRA) should also do the same.

“The Telecom Sector has been given the status of an industry by the Government of Pakistan and we believe that it is the right of telecom companies to get electricity tariff at industrial rates,”

Federal Minister for IT and Telecommunications Syed Amin Ul Haque expressed his resentment. He said such steps were important to incentivise investment in the country – both for those working here and others to come in too.

On the other hand, opponents of the move, including stakeholders in the power sector, are of the view that the criteria to be eligible for an industrial tariff is not met by the telecom sector and a change in categorisation would lead to a transfer of burden on other consumers, including residential users.

“It’s a very unfortunate decision. It is difficult to understand that when the government, including all its relevant ministries, gives industrial status to telecom, how can NEPRA deny it? 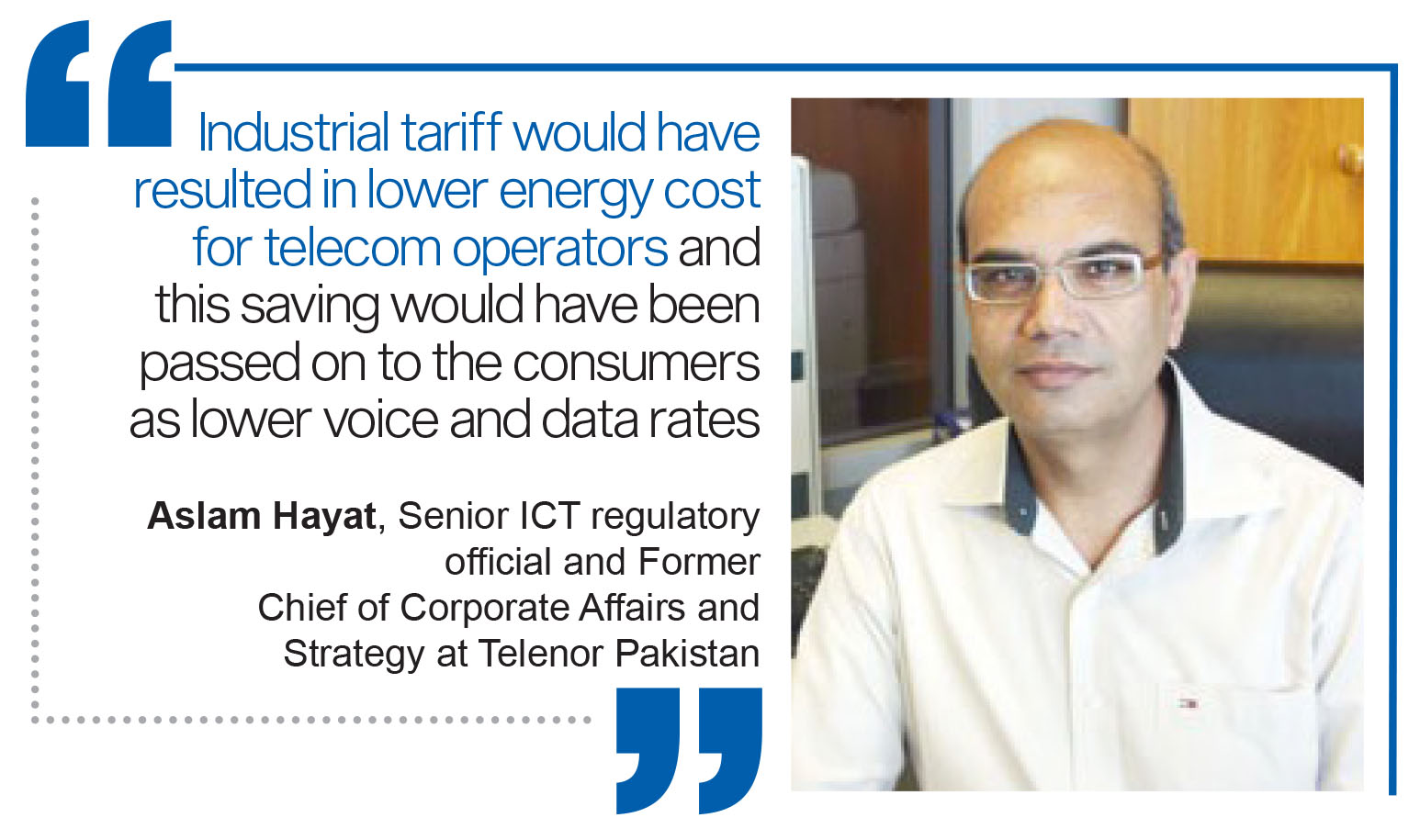 Telecom is now the backbone of every enterprise in the country; treating it as a luxury is criminal. Granting industrial status would help the telecom industry to provide better service to all the segments and sectors of the country.” Parvez Iftikhar, Senior IT consultant and Founding CEO of Pakistan’s Universal Service Fund (USF) told Profit.

To figure out who makes the better point, it is important to first understand how the power categories work.

Basically, NEPRA segregates its final consumers into categories based on the purpose of electricity consumption. The charges for each segment vary according to the time of usage and the distribution company (DISCO) supplying the electricity.

As per NEPRA, “industry” is defined as “a bona fide undertaking or establishment engaged in manufacturing, value addition and/or processing of goods.” Therefore “industrial supply” means the supply for ‘bona fide industrial purposes in factories’ hence, according to this definition, indicating that the application of industrial supply tariff would be on industries involved in some manufacturing or production activities.

Under the current structure, telcos are being charged a “two part” tariff. Through this mechanism, the total charges are computed by combining fixed charges on the basis of capacity and variable charges based on actual consumption. We will get to why this is a problem a little later.

How important is this for telcos?

To answer this question simply, consider that energy costs are the single largest contributor to the cost of running tower sites that are the backbone of telecom systems. The image of figures shows an extract from the financial statement of Deodar (Jazz) representing the cost of service data for 2020 and 2019. Over those two years, the utility costs, consisting of fuel and electricity charges, account for an average 45% of overall service cost. When compared to the net revenues of Deodar, utility costs stand at an average of 38% over the given period. Further, compared to December 31, 2020, fuel costs have almost doubled, meaning the costs of services would have risen disproportionately compared to the revenues. 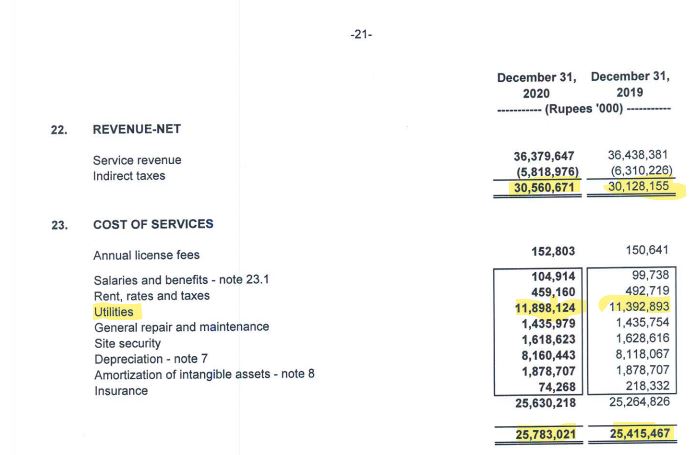 Deodar isn’t the only one. If we look at Ufone’s financial statements for the year ended 31st December 2021, ‘power and fuel’ costs stood at around Rs7.4 billion, which is around 14% of Ufone’s revenue in 2021. For Telenor Pakistan, results for the second quarter of this year were also negative. The Earnings Before Interest Tax Depreciation and Amortization (EBITDA) experienced a decline of 15% as operating costs increased by 30% partly because of high energy costs.

Further, PTCL in its submission to NEPRA, declared that the company had 7,823 connections to telephonic exchanges across 19 regions that consume around 16-17.0 million Kilowatt hours (Kwh) of electricity per month, which costs them approximately Rs340 million. These exchanges are essential for smaller rural districts where this infrastructure allows subscribers to call each other by switching (interconnecting) their lines.

The additional power costs, as per PTCL, have undermined revenues generated by exchanges with the company closing approximately 10 exchanges every month. 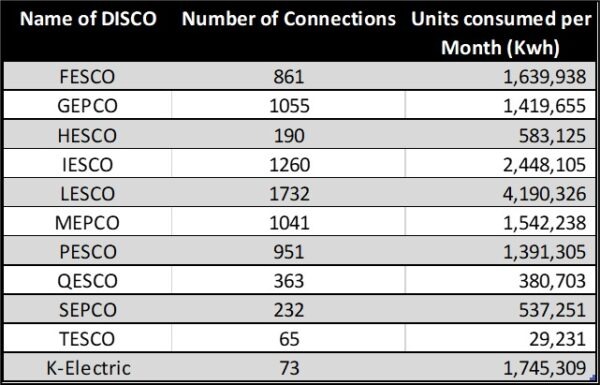 PTCL, in its submission, stated that it has 75% of its total telephone exchanges installed in the rural areas of Pakistan with small switching arrangements as per villagers’ demand.

The sanctioned/connected load of these connections fall between 5 kW to 40 kW and the running load of these exchanges is a maximum of 10 kW. Why is this a problem? Essentially, the commercial users are charged on a two-part basis (actual energy consumed and maximum demand) as mentioned earlier.

Having a sanctioned load, which is the expected electricity consumption registered by WAPDA, in excess of usage adds to the fixed part of the electricity bill. PTCL claims that, in many cases, the sanctioned loads of its exchanges do not even reflect the actual load, especially in the winter season. It further claims that, sometimes, the Maximum Demand Indicator (MDI) is recorded three to four times higher than the sanctioned load or a deliberately wrong reading is recorded by the reading staff of DISCOs.

Jazz, which was also part of the proceedings, submitted that it has 14,558 towers across the country which rely primarily on the power supplied by the DISCOs and the company is compelled to pay the electricity costs at higher commercial rates. These costs, Jazz said, have an egregiously overbearing financial impact on the telco.

As a bottom line, Jazz stated that, by converting to the industrial tariff, the telecom industry can save up to Rs7 billion annually.

The rationale for not assigning industrial tariff

On the flip side, K-Electric, a DISCO, in its official submission to NEPRA stated: “As per terms of tariff, the categories are decided as per nature of use, instead of the status of the sector. The industry tariff as per terms of tariff is specified for the entities that are involved in manufacturing, value addition and processing of goods which are considered for application of industrial’ tariff.”

“We understand that the petitioner sector (Telecom) is not involved in manufacturing of goods and is a service industry and accordingly levies services tax in bills to consumers and hence as per current terms of tariff, the industrial tariff is not applicable on the petitioner,” K-Electric added.

Ministry of Energy (MOE), as part of the proceedings, were also opposed to the change of status: “Telecom companies being engaged in the provision of telecom services through the retail distribution network infrastructure, may be treated as a commercial value-added activity for which consumer has to pay and, therefore, the same may be continued to be served electricity under commercial tariff category.”

“Any change in tariff category of telecom sector would directly impact the other consumers and the impact would be around Rs20 billion. It also submitted that various other sectors like ‘film’ have also been declared as Industry and they are also eying for the shift in tariff to Industrial Category,” MOE further added.

However, probably the most bizarre comment came from the Central Power Purchasing Authority (CPPA), whose official representative stated that allowing the switch to industrial tariff would burden the power sector in order to support “luxury products” offered by the telecom sector.

The counter-argument of the Telcos

The CMOs, while presenting their case, argued that multiple laws and legal precedents also refer to the telecom sector as an industry. Most notably, a Ministry of Industries and Production notification dating back to 2004 and the amendments in the finance act 2021.

Further, telcos were of the opinion that the processes deployed by the sector starting from buying spectrum to providing services to the consumers include a lot of value addition.

Aslam Hayat, Senior Information and Communication Technology regulatory official and former chief of corporate affairs and strategy at Telenor Pakistan, told Profit: “There are two angles to it. One that industrial tariff would have resulted in lower energy cost for telecom operators and this saving would have been passed on to the consumers as lower voice and data rates.”

“Another angle is that no investor will now trust a government promise made in any policy. The telecom sector invested heavily based on the promises made in the Deregulation Policy of 2003 including giving industrial status to the telecom sector. After 19 years, this status was not accepted by the power sector and FBR. This would definitely shake the confidence of the investors going forward,” he added.

When NEPRA inquired about passing on the benefits of reduced costs to the consumers, PTCL stated: “In peak hours, when they are paying huge bills for electricity, the telecom operator is offering different discounted packages to the public. Similarly, in areas where frequent load-shedding is observed, telecom operators continue their services by generating electricity on alternate fuel-based sources to ensure uninterrupted signals.”

Unfortunately, for the telecom sector, NEPRA was not convinced by their arguments. Amongst many reasons to reject their petition was adherence to the strict definition of value additions. The regulator was of the view that acceptance of the telcos’ rationale can set an undesired precedent which would lead to other commercial users also demanding a change in tariff, resulting in an imbalance of the consumer mix. However, the telcos are still hopeful and are gearing up to challenge the decision.