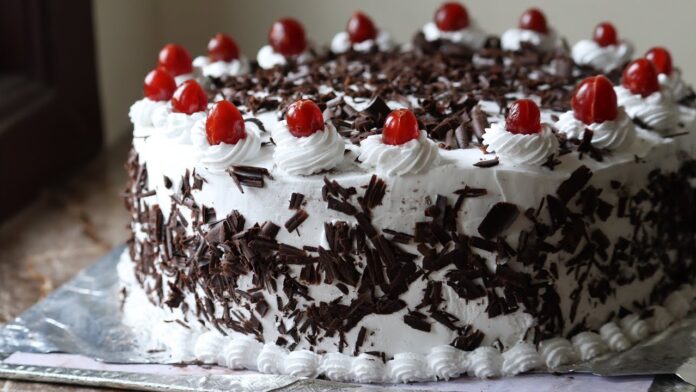 This week, Profit’s cover story chronicles not just the metrics that can be used to figure out what income group constitutes ‘middle-class’ in Pakistan, but also what it means to be and feel like you belong to the middle-class. It is, after all, a complex equation. There might be many people that are socially mobile, or who inherited money late in life but grew up with very familiar middle-class experiences. Understanding the issue on a spectrum is important, but one element that may help us understand the phenomena a little better is black forest cake – especially considering national cake day was celebrated last week and black forest being the national cake of Pakistan.

It is entirely likely that you may remember this once highly sought after dessert from a decade ago or longer. Recently, it made a bit of a wave when back in October former prime minister Imran Khan celebrated his birthday  by cutting into a rather unappetising black forest cake. After the video became public, it raised questions for a lot of people about the simplicity of Khan and how he was celebrating a milestone birthday (his 70th) with a solidly middle-class cake.

Except that is where the problem comes in. Back when ‘black forest’ cakes (called that for the dense chocolate shavings that give it its signature look) first became a thing in Pakistani bakeries, it was quite in vogue. In fact, for a few years, it was even a fashionable cake to serve at birthday parties and per slice at restaurants. However over the years it has been demoted. As the word ganache has become more familiar and red velvet and Lotus have taken precedence, the Black Forest cake has been relegated not to the ‘fresh cream’ version of ‘badamon wala cake’ status.

“People don’t really ask for black forest anymore. They are not difficult to prepare, however as with all cakes with fruits they do have a shorter shelf life so bakeries don’t have as much incentive to make them as well,” says ‘Patissier Bilal Khan’ by Petit Four.

Meanwhile Shanza, founder of Flapjack Co, says that the market has been evolving over the years. “Somebody will add ganache or chopped cherries or jam depending on who they are in the mood for. So the cake is trying to stand out in the market because there is a lot of competition in the market, both for the up-scale market and for classic black forest cake.”

“If you were to ask a 13 year old what a black forest cake is, probability is they won’t know. The cake, however is now associated widely with the middle class. It uses cheaper product and is cheap to make. The malt cake, similar to the black forest is also a middle class cake now,” says Arooj Abbas, a consultant chef.

The price point of a black forest cake widely varies. You can get a cake for around Rs 300 per pound from your muhalla bakeries; an can go upto Rs 1000 per pound at premium bakeries.

“Nostalgia plays an important role in food. Depending on the mood or the season it will remind you of things and senses, time, season, the gathering that you are in — all of this plays a huge role in food cravings. As far as the middle-class nature of the cake goes, I don’t think this is the case. What is middle-class about cherries, or chocolate? I suppose because it is readily available and we are more familiar with it, it is more common but not middle-class at all.” adds Shanza.

Dilshad Irani, manager of Armeens, an old establishment famous for their cakes says the black forest cake is still a hot seller. “Younger people buying the cake, however, usually buy it for people of the older generation rather than for themselves.”

“A seasonality factor also plays an important role. We make the cake when we have fresh cherriesin season. Canned cherries are just not the same,” says Amna Tauqeer, Founder of Yums by Amna.

And that is what gives rise to this piece. This once popular dessert went through a transition. It began being made by the likes of Masooms and Kitchen Cuisine before being picked up by Shezan and Gourmet, and eventually by little neighbourhood bakeries as well. While high-end black forest cakes can still be found very easily, this is a cake that is more likely to have cheaper versions at every corner bakery as compared to say a lotus cake or a red velvet cake.

It was a surprise to us, thus, when after Imran Khan’s cake made the rounds on social media that there wasn’t a lot of marketing effort put into trying to sell more black forest cakes off the back of this nostalgia. After all, nostalgia marketing is a very real thing.

So what can we learn from this? Lately, there has been a trend when it comes to cakes. A number of bakeries around town have the same-looking cakes and roughly the same menu. You can find a milky malt cake, three milk cakes, rocher cakes, Nutella cakes, mousse cakes, and German fudge cakes. Sometimes some bakeries shake it up and add a cheesecake or a red velvet cake.

However, the chances of you finding a black forest cake or the pineapple cake you grew up eating on every birthday aren’t as common as before, especially at newer establishments. Maybe you will find them at your mohalla bakeries and some old-school bakeries that cater to people who enjoy sweet, creamy desserts that don’t just taste like chocolate.

The Black Forest cake and the Pineapple Cream cake have been staples at birthdays for everyone until the last decade. Dating back to the 16th century the cake originates from the Black Forest Region or Schwarzwald, in Germany; invented by Josef Keller a pastry chef at Café Ahrend. This was when chocolate and cake found themselves in melodious harmony for the first time, in fact, this is when chocolate was spreading slowly across Europe. The cake was made with cherry brandy, cherries, cream, and chocolate. Yum.

The Black Forest cake sponges are not soaked in brandy (or so we think), instead they use citrus juice to moisten the sponge cake base. Since cherries are not as easily available all year round, Pakistani bakers add canned fruits like pineapple and cherries between the two sponge layers covered in cream.

The popularity of these cakes went down as newer chocolate cakes took centre stage. This is primarily because bakeries found it easier to make and store chocolate cakes compared to black forest cakes. Chocolate cakes generally do not melt as fast as cream cakes; nor do they require certain kitchen conditions for them to be made. You, however, cannot just whip up heavy cream in a hot kitchen. One mistake and the cream goes flat, and it’s wasted.

This made bakers happily move towards other options. Secondly, because the cakes are drenched in citrus or fruit juices they tend to go sour faster if not stored right, or left in the fridge for too long. A reason why they are drenched is that they are made using sponge cakes. Sponge cakes are generally harder to bake than regular cake bases. This is because you need to whip the egg whites and yolks separately, be very gentle with the mixing and ensure it bakes evenly. Baking the sponge is a time taking process and takes longer than a regular gooey chocolate base. The sponge is also very dry on its own and needs to be drenched in milk or some syrup to make it moist.

Hello, where is the nostalgia marketing?

With a former PM eating a no-longer raved-about Black Forest cake, rather hungrily, on his birthday should have encouraged bakeries to rekindle demand. This is especially true for bakeries that continue to make the cake.

It is a shame that no advertising agency thought to jump on the nostalgia marketing bandwagon. For those of you who don’t know, nostalgia marketing is a strategy used where brands tap into positive and familiar concepts from previous decades. This method appeals to consumers and builds trust for new ideas; or rekindles a spark of demand for existing yet not as-popular as before goods and services.

Zain Jafar, Founder of R Trends however agrees that this was a missed opportunity for campaigns. He adds, “It may also be likely that people thar run campaigns did not even identify the cake the former PM was eating.”

More importantly, Jafar points out that back in the day the black forest cake took off when bakeries were generic. “With brands popping up, we now see individuality and trends being followed.”

He adds, “It may also be likely that because it is no longer a premium product, bakeries did not want to associate themselves majorly with the cake?”

Umair Kazi, Partner at Ishtehari says that some agencies may have thought it would be classist to run a campaign around it. “It may show that we’re only bringing it back because it’s fit for a prime minister while the fad went away and was passed onto another socioeconomic group.”