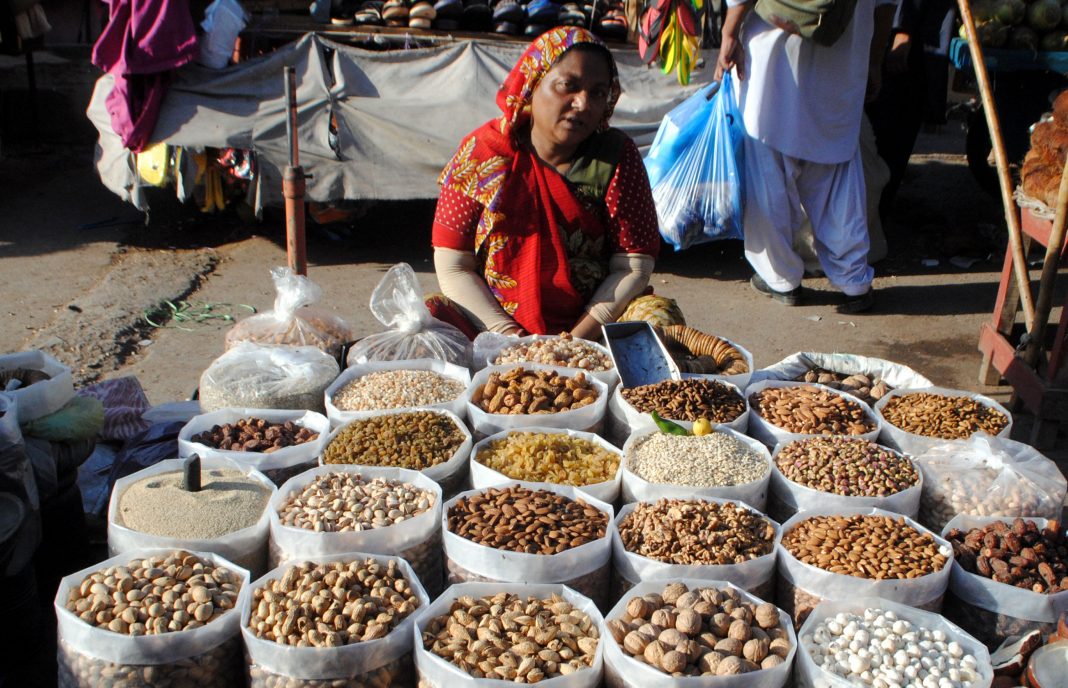 Clad in a vibrant Banarasi saree with a messy braided hairdo, Manisha Patel stood at her fixed spot amidst the early morning hustle bustle of the main Empress Building – a famous market situated in Sadar, downtown Karachi.

Her deep green bangles chimed in unison as she swiftly stuffed dried fruits in dull khaki paper bags for customers.

“Some shop owners here [Empress Market] buy from my stall every morning. I keep their packets ready before they arrive,” Patel said. All this time, her eyes remained on her shade-less stall, a few plastic sacks filled with dried fruits and a foot-tall wooden stool. Her hands fixed packets expertly as she served her customers.

The 52-year-old Hindu woman sells dried fruits every day from morning until evening at the same spot. Patel started this work 30 years ago and has been involved in the same business ever since, she recalled, tears rolling down her cheeks.

Though Patel, who toiled in heat, cold and rains during all these years, has been able to double her daily income to Rs400 or Rs12,000 a month (if she works 30 days a month), she still earns less than the province’s Rs14,000  minimum official wage for unskilled workers.

Patel is not the only Hindu woman in Empress Market who is in the business of dried fruit vending. The front street of the main Empress Building is encroached with more than a dozen small and large stalls operated by women from her community, who deal in dried fruits to earn the bread and butter of their families.

These stalls are owned by wealthy merchants who have large-scale shops in Jodia Bazar – the biggest wholesale market for commodities in the port city. Affluent dried fruit merchants hire these women from the Hindu community on daily wages to sell the merchandise and supplement their earnings.

“Seth Sahabs [wholesalers] hire us because we are easily available to work on lower wages,” said Rukmani, another Hindu dried fruit vendor who earns Rs300 in daily wages. “We settle for lower compensation because we [Hindus] have fewer work opportunities.”

The minorities in Pakistan are nearing 13 million or 8 percent of the total population, according to the 1998 census, the most recent by the government of Pakistan – some estimates suggest they are 10 percent of the population. According to a recent book named “Religious Freedom in Asia” by Edward P. Lipton, Christians, Ahmadis and Hindus have  populations of 3 million, 3 to 4  million and 2.8 million respectively. However, it is crucial to note that given the disadvantages and stigmatization attached, communities do not opt to identify as minorities. This is why the above-mentioned figures are only a conservative estimate.

In a country where census has not been conducted for the last eighteen years, it is almost impossible to find the correct employment numbers for minorities. However, a report by Pakistan Society of Victimology suggests that more than half of the minority population of Pakistan is living under the poverty line. In monetary terms, poverty line stands at Rs3,030 per adult equivalent each month.

Patel, one of the oldest dried fruit vendors at the Empress Market, is a classic example of the hardships minorities go through in the country’s labour market. With seven family members to feed, including a son with special needs, Patel earns approximately Rs1,714 per family member a month, which is 43 per cent less than what is required to stand aligned with the poverty line.

Even if one looks at public sector employment, the condition of minorities is not any different.

According to an amendment passed in 2009, all government organizations are bound to set a 5 percent quota for non-Muslim employees. However, several cases were observed where the law was not implemented. Out of a total of 2.8 million public sector employees, only about 11,000 or less than 0.5 percent are non-Muslims, out of whom, many are low-level employees or sanitary workers.

According to the research carried out by Profit, more than 70 per cent of the seats reserved for the minorities in the federal government are vacant. This is despite a fixed legitimate quota reserved for minorities in government jobs. “Around 10,573 posts can be sanctioned under the 5 per cent quota reserved for non-Muslims in the federal government,” the research concluded. However, out of these only about 2,447 are occupied and 8,126 jobs allocated for the non-Muslims remain vacant.

Besides limited work opportunities and lack of acceptance, minorities face a larger threat in the face of inconsiderate behaviour of the institutions meant to protect them in the first place.

“Police officers patrolling in the market find it reasonable to grab a fist full of dried fruits from our stalls any time they wish,” said Patel. This stands tall as an example of ill-treatment faced by many workers around all spheres of the society. This is in addition to Rs400, which she pays to the shop owners at Empress Market who safe-keep her dried fruits each night inside their shops.

However, extortion and exploitation are not the only issues facing minorities, they also go through extensive hardships while at work. This may come in the form of stigmatization or physical and mental abuse.

The case of 22-year-old Roop Chand Bheel further elaborates this issue. Due to lack of employment, Bheel went to MirpurKhas to work as a cotton picker in a farm. He was accused of stealing and was buried in the ground up to waist level. First, he was gashed on different parts of his torso with a sharp-edged knife, and then pulled out only to be set ablaze. Succumbing to his burns, the young lad died in a hospital in Karachi three days following the incident.

“In shops and factories Hindu and Christian servants and employees never drink water from a glass that Muslims use,” said a minority rights activist in Karachi who wishes to remain anonymous.

The activist further said that socio-economic challenges that come with this discrimination affect the daily lives of religious minorities in Pakistan tremendously.  Minorities are often relegated to live in decrepit conditions in slums such as ‘French Colony’ in Islamabad and ‘Maaripur’ in Karachi, where Patel and her colleagues live.

Bonded labor is another atrocity faced commonly by the minorities of Pakistan. According to recent estimates by the Asian Development Bank, approximately 1.8 million people are in bonded labor across the country. However, some estimates are even higher.

“Hindus predominantly the Bheel and Kohli clans are most vulnerable to bonded labor in different areas of Sindh,” said a Bonded Labor Report by Thar Deep Organization, an NGO working for the basic rights of minorities in Pakistan.  Unfortunately, the realities aren’t any different for other minorities living in Sindh and Punjab.

“We are breeding venom,” said LajpatSarkar, a minority rights activist working in the rural Sindh. “Kids belonging to minority communities will grow up to be nothing but bitter venoms,” he said. “It’s high time that we brought an end to bonded labor and religious discrimination in schools and madrasas. You just can’t take away their right to feed themselves,” Rai said.

As part of a signatory to United Nations Millennium Development Goals, Pakistan agreed to eradicate extreme hunger and poverty – one of the eight sustainable development goals the country pledged to achieve by 2015 – yet people like Patel continue to live below poverty line to this day.

At the end of the day, Patel along with her colleagues packs her stalls and prays at a nearby temple. She then collects her daily wages and heads back home, where she has seven people waiting for her to bring food in the house.

Update: Bazaar denies report of raising $15m in seed round