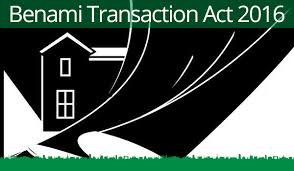 The Senate on Tuesday passed “The Benami Transactions (Prohibition) Bill, 2016” for the prohibition of holding property in benami.

Minister for Law Zahid Hamid, who moved the bill, said that there was a realisation that the benami transactions (prohibition) act is in operation in other countries of the region including neighbouring country.

He said that property held benami has been causing concern to the tax authorities and the past practice and experience has shown that benami transactions have often been resorted to for furthering illegal or questionable objectives including evasion of taxes.

Senator Azam Swati appreciated the government benches for presenting this important bill and termed this a good step. Opposition leader Senator Aitzaz Ahsan didn’t oppose the bill, however, on his one objection, the house made amendment in one clause of the bill by the majority.