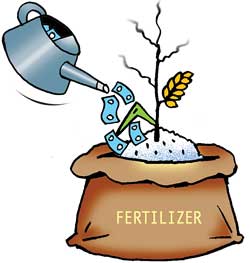 The government has released the second tranche of the long-awaited subsidy amount promised on fertilizers in the National Budget 2016-2017.

It has been a generous incentive for the farmers by federal and provincial governments to reduce the prices of various types of fertilizers including Urea and phosphates.

Over Rs 27 billion had been allocated in the budget for the fertilizer subsidy besides reduction of the GST on fertilizers from 17pc to 5pc. The manufacturers also came forward in support of this positive initiative and voluntarily absorbed the costs by Rs 50 per ‘Urea’ bag.

The Ministry of National Food Security and Research (MNFS&R) after eight months has released around Rs 6.5 billion against claims of over Rs 21 billion since July 2016, while similar amount was released in the beginning of the scheme, says a press statement issued here on Thursday.

The delays have been caused by the complexities of subsidy disbursement mechanism issued by MNFS&R, which demanded verification of sales from the provinces instead of relying on data provided by companies or that available with National Fertilizer Development Centre (NFDC).

Besides Punjab, others have yet to respond, while the companies are submitting sales reports to provincial agriculture departments on daily basis. Resultantly, the fertilizer manufacturers and importers had to arrange huge funds to manage their routine expenditures as heavy amounts stuck up, creating severe cash-flow challenges for the industry.

The industry acted in good faith to make the scheme successful and has been passing on the subsidy to the farmers in line with the spirit of Kissan Package since June 2016. ‘However, we have experienced very long delays of over eight months in getting our money back’, he added.

He hoped that Ministry of National Food Security and Research (MNFS&R) would be able to overcome the ongoing procedural complexities that caused undue delays and process the payment of rest of the subsidy claims at the earliest. He also urged the provinces to support the process of subsidy disbursement mechanism through timely reports of sales in the interest of farmers’ community.

There is a dire need to bring down the cost of inputs and ensure availability of gas to enable the domestic industry in long term to sustain prices of locally produced fertilizers.

The upward trend in international prices has already rendered the sale of DAP at present prices unviable. Moreover, the federal and provincial governments should allocate adequate funds well in time, if the scheme has to be continued for the benefit of the agriculture sector.