After failing to launch a clothing export business with her husband, Kulsoom Halai identified a gap in the market for children’s clothes and filled it with QnH. Now almost 17 years later she plans to expand her workforce and launch the brand online to compete with bigger brands 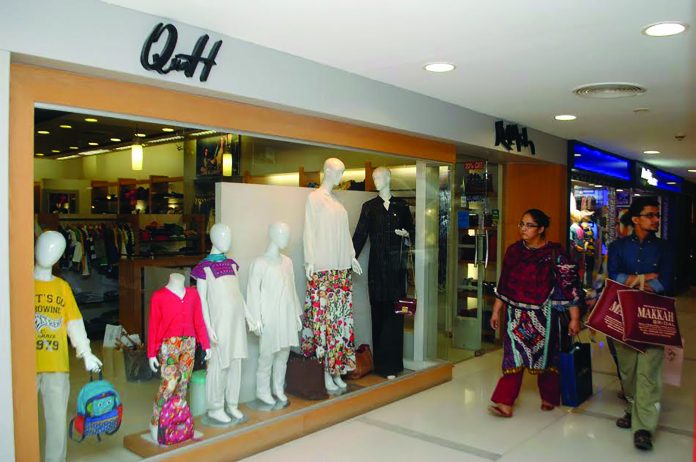 Mother of two teenaged boys, daughter of Anwar Moosajee (owner of the famous A. Moosajee and sons), a food and nutrition scientist, an entrepreneur and a graduate of Drexel University, USA: Kulsoom Halai is the woman running the show behind QnH – a niche clothing brand which recently made rounds in the news for its updated and modern lines.

When she came back from the US in 1994, Kulsoom Halai, then Kulsoom Moosajee, got married to Ammer Halai who himself had worked for 8 years in the US for Whitaker Myers Insurance Group in Cleveland, Ohio. Together both of them wanted to start a business and a garment export factory was almost setup by the newlyweds. However, luck did not play out well and the venture had to be shut down even before it started due to the disturbed security situation of Karachi in early 90s.

Halai then stayed at home whereas Ammer found a job in SGS Pakistan for himself. However their entrepreneurial instincts still did not dissipate. A few years down the lane and Mr. and Mrs. Halai, while trying to find clothes in the market for their young children, found a business idea which the couple did not hesitate to initiate.

“Our kids were young and we couldn’t find nice clothes with reasonable prices that we would like to buy,’’ Halai recalls.”We thought that there’s a niche for kids clothes and there weren’t many kids clothing stores at that time,” she goes 20 years back in time when she found a business line which now stands as 12 percent shareholder in overall apparel market globally and made €135 billion in sales in 2015.

The duo amalgamated Ammer’s passion for business and Kulsoom’s interest in designing clothes – which she had been doing for her kids and relatives for a long time – and ventured out with minimal investment at Zamzama.

Started as a ‘mom n pop’ shop in 2000 by Kulsoom and her husband (late) Ammer Halai, QnH is known among the mothers of Karachi as their kid’s go to brand. However, primarily started as an eastern wear for kids’ fashion, the brand has started to evolve recently to catch up with the ‘severe competition’ in the apparel industry.

As Halai herself says that with growing competition and brand war in the industry, a ‘mom n pop’ shop cannot go on its own.

For this purpose QnH introduced a western clothing line for girls, between the ages of 15-25, in January last year by the name of Kulash: a refined and extended version of western clothing the store previously displayed on a small scale. This move came 16 years after the first kids store opened under QnH banner at Zamzama.

“All this time [mothers] have been telling us that their kids are growing up, where do they go now?’’ Halai shared a popular customer demand she received for the last couple of years.

Today, with four stores in the city and an online store in planning, QnH is aiming to become known as a brand for kids as well as teenage girls who according to Halai want to dress up in ‘western street fashion’.

Kulash is Halai’s offering for the teenage girls who once came to QnH as kids and grew up wearing the outfits Halai designed back in the day. Today with a team of in-house designers, QnH wants to cater to the clientele that has a changed demand and no other place that offers western clothing in a competitive price.

Competitive pricing is what Halai considers her unique selling point (USP). Started from scratch by Ammer – to fulfill his passion of a business – QnH still stands as a small apparel house among the industry giants. Halai thinks her lower pricing for higher quality is what drives her business growth and remains her business strategy.

“I have an upper hand on my prices and I try to keep my prices as low as possible so that I can sell more,’’ says Halai. ‘’I have a thing that I want to have more turnover than not sell anything at all,’’ she tells her business mantra.

Over the years despite the selective target market and competitive pricing, QnH remained the underdog in the kid’s clothing industry. Its competitors Leisure Club, Outfitters and Guts which started after QnH seemed to have taken the larger chunk of market share on the basis of their large workforce and bigger stock.

Increasing the workforce – which is imperative for the brand – is on the to-do-list of the lady entrepreneur to carry forward her husband’s legacy.

Halai has decided to revamp the business in order to counter the competition QnH faced in childrens clothing, its forte and 60 percent of business till today. By the beginning of last year, Halai introduced Kulash, redesigned the shops and transformed the business, which is named after her two sons Qasim and Hassan, from a store to a ‘brand’.

A wide contrast between the old shops of QnH and the new ones can be vouched by the old customers of the clothing store.

However, regardless of the problems and plethora of responsibilities, Halai says she enjoys her work because this is how she has been brought up in a business family. Sometimes it’s a tough job for a woman to do: designing clothes and running a business venture simultaneously – a passion she shared with her husband.

Sometimes it’s a tough job for a woman to do: designing clothes and running a business venture simultaneously – a passion she shared with her husband.

A typical day, Halai says is ‘hectic’ and then laughs off before explaining the one word answer. Along with fulfilling the responsibilities of a household and her husband’s business, she also takes part in A. Moosajee business which is her family’s establishment.

“I start off my day at 11:30, sometimes earlier, sometimes later and I am in the office till about afternoon. I go home for lunch and then I come back after an hour or so and then I am here till 7:30,’’ Halai concludes her everyday routine which includes taking care of the household and her family responsibilities.

Being the sole owner of the QnH until her children join the business, Halai currently supervises the admin, purchasing, inventory and marketing. With the intention of going national and online, Halai thinks her passion for her husband’s brainchild is what drives her through the society where sometimes being a woman entrepreneur becomes a constraint.

“It’s not easy in our society for a woman to [do business] but it’s all in your own mind how you perceive what you want and there’s no stopping,’’ she says with determination.

Although Halai considers ‘hard work’ to be any entrepreneur’s asset and considers it mandatory for all women who want to follow her footsteps. She also admits the importance of strong team and marketing – two areas where QnH has started focusing on recently.

Talking about the challenges of her business, she sums it up in one line for all apparel industry players, ‘’You have to really give in your best and sometimes even your best is not enough.’’

However, from the experiences with her husband and her family business Halai has learnt the way to pursue success: ‘’You can’t just sit and say okay fine, I am done. Every day you have to keep on, keep on and keep on.’’

“It’s all in your mind; if you want something that bad just go ahead and do it,’’ she says to motivate the women who want to follow her line.