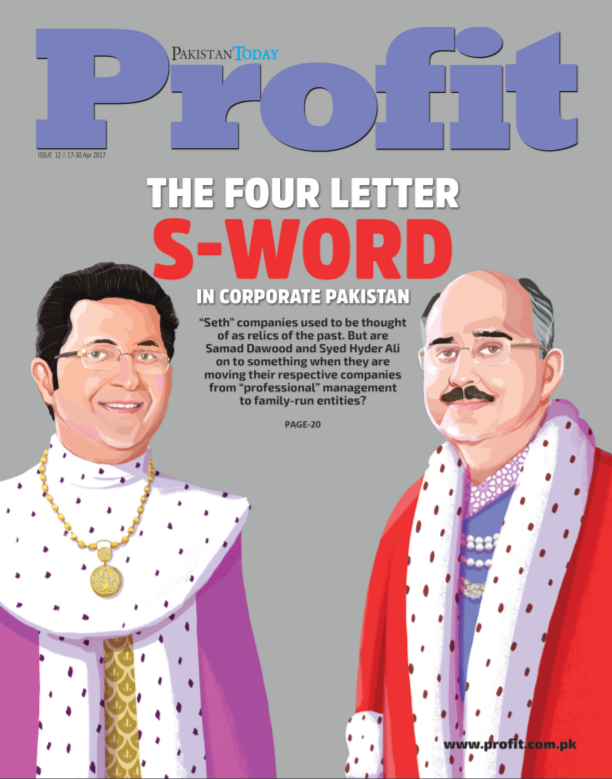 Received wisdom told us that, given enough time, sophistication and exposure to best modern practices, family-run firms would transform into professionally run companies, with qualified CEOs and board members calling the shots. Informed decisions by professionals, rather than the arbitrary whims of the owner.

Not enough of that happened in Pakistan. Other than the banking sector, where the regulator ensured such practices by law, most other big Pakistani commercial outfits remained firmly in the owners’ grip. In fact, two of the very few companies that actually did have a track record of career employees calling the shots, Packages and Engro, seem set to go the Seth route. (see our cover story on page 20)

Now I know you would have already made up your mind about which side of this particular debate you are. Rooting for the professionals just instinctively seems right. You can gather that much even from the very words used to describe the two camps: Seths vs Professionals. It is the Seth here that has to work hard to dispel the impression that he or she isn’t unprofessional; the careerists have no such issues. If the latter rose through the ranks to get the top slot, it stands to reason, then it must be because of their professionalism. No one takes into account that perhaps the careerist was an excellent team player or second-in-command, but might be unprofessional as the captain of the ship. It can – and has been known to – happen.

Let’s listen to both sides of the story.

The primary argument against the Seth-model centres around the lack of accountability. Who is going to keep him/her in check? Employee-CEOs can be told, bluntly, that they are embarking on a march of folly at the expense of the company by members of the board, shareholders and, yes, the owners themselves. What does one say to the owner?

Furthermore, companies that have grown past a particular scale are now faced with problems that can’t be compared with those that founder-owners faced in the heady early days of a company. There are plenty of Pakistani businesses that couldn’t grow past a certain level because, though the founders excelled at the scrappy hustle of a new, young business, they couldn’t wrap their heads around large corporate financing and dealing with complex regulatory frameworks that are required of much bigger firms. At least not the way an educated professional, with years of experience dealing with these issues could.

The arguments for that relative lack of accountability in Seth-run firms could be a strength as well. When a company is making a fundamental shift in its core businesses, career-employees can be bullied into playing it safe; owners, not so much. We can see this in the case of Samad Dawood diversifying Engro’s fertilizer-heavy profile into other sectors like energy. And Packages’ Syed Hyder Ali leading the charge into retailing and foreign expansions. Career employees would be too shy to even suggest such fundamental changes.

Lastly, when the going gets tough, when the company is forced to sell its good silver, career employees can’t be faulted for leaving. Why would they put their personal lives and financial futures at risk for an endeavour which, even if things do work out, won’t yield them anything? Owners, on the other hand, can’t just give up and leave. There is a measure of comforting certainty in that, especially for investors evaluating a company to invest in.