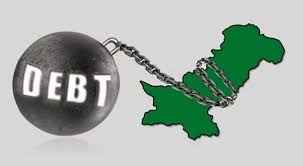 Responding to various supplementary questions during question hour, the secretary said the debt was under the limit of Debt Limitation and Responsibility Act.

He brushed aside that hefty loans were taken by the government which could not be paid.

Afzal said the national economy was stable and foreign reserves stood at over $ 20 billion adding that it was mere $ 8 billion in 2013 when the incumbent government took charge. The revenue collection witnessed 40 per cent increase during the last four years and it would be further improved, he said.

Replying to another question, he categorically said that a proposal was under consideration to devalue the currency.

To a question, Afzal said Indian enmity related to China Pakistan Economic Corridor (CPEC) has been revealed. He appreciated the Foreign Minister for effectively pleading country’s cause during his visit to the USA. Owing to effective policies, US delegation was visiting Pakistan and Afghan president was also in the schedule, he added.

He also brushed aside speculation that economic sanction was being imposed on Pakistan.

He said the members could not only raise the issue in this house but also in the meeting of the standing committee on finance.

To another question, the minister said Zarai Taraqiati Bank Limited (ZTBL) had disbursed loans of Rs 92,450.925 million during the fiscal year 2016-17.

To a supplementary question, the secretary said ZTBL has 460 branches across the country and out of which 212 branches were running in losses.

The Bank has performed well over the past four years. Its total assets have increased from Rs 148,448 million in 2013 to Rs 215,561 million in 2016. All officers working in the head office have contributed to this performance.

To a question, he said trade deficit was increased due to a surge in imports of heavy machinery for CPEC projects.