Water supply from Mangla Dam closed due to water scarcity 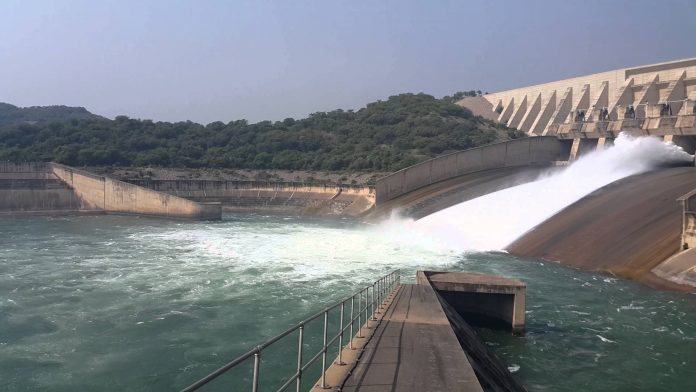 A spokesman of IRSA, Khalid Rana while talking to Pakistan Today, said that this is second time in the history of Mangla power house that it has been closed due to the water scarcity. He said water supply to the canals of Punjab has been closed as only two canals named as Chashma and Thal canals are receiving only 7,000 cusecs water from Tarbela dam instead of Mangla dam to meet the demands.  He also said that Mangla Dam has the capacity to store 7.4MAF while only 3.4 MAF water is currently available in the reservoir of Mangla and there is a shortage of 0.7 MAF of water in the dam. Last year, there was 4.1 MAF water in the reservoir on the same day, he added.

“Water supply to the canals of Punjab from Mangla Dam has been closed on the request submitted by Punjab Irrigation Department as a strategy to cope with present,” Khalid Rana said.

Sharing details of water supply to the provinces, the spokesman of IRSA said that provinces are receiving water supply as per their demands. He said as of today, Sindh is receiving 40,000 million-acre feet (MAF), Balochistan is receiving 5,000 MAF, while Punjab 7,000 MAF and Khyber Pakhtunkhwa is getting 3,000 MAF to meet water demands. “We will review water receiving and supply situation to the provinces in the first week of coming November when there will be a need of water for wheat sowing,” said IRSA spokesman.

Khalid Rana also said that IRSA has repeatedly requested the provinces to devise a strategy to meet the issue of water scarcity in the rivers. He said provinces are formulating their strategies and Punjab has devised the strategy to meet its demands of water for Rabi crops while rest of the provinces are requested time and again to formulate it for meeting water demands of Rabi crop season.

The sources further said that during the same time, Tarbela level is 3.7 feet higher or 1483.70 feet against the anticipated 1480 feet. However, the level of Mangla is more than 10 feet below or 1182.35 feet against the average anticipation of 1192.50 feet.

He pointed out that Pakistan is amongst the 15 most water scared countries with fourth highest use of water rate but lowest storage percentage.

At present, he said that the capacity of water storage is only for 30 days. He said that 94 percent of surface and groundwater is used for agriculture sector in Pakistan while worldwide average is 70 percent.

Out of the total 145 MAF surface water, he said 29 MAF water is flowing to the sea, while other losses include 40 MAF irrigation conveyance losses, 10 MAF river system losses and 61 MAF losses in farm gate. Muzammil Hussain pointed out that tube wells increased 11 folds in 50 years while the water extraction has created an alarming situation, especially in Quetta. He said that about 50 MAF ground water is being pumped annually while water table is lowering at a fast rate and it would not be sustainable. He said that ground water extraction should be regulated and controlled, otherwise it is not sustainable.