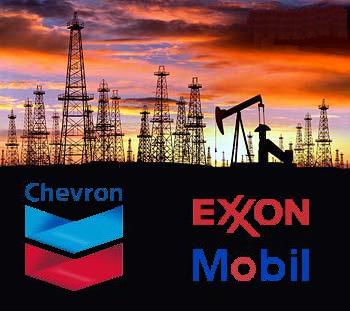 Exxon said Friday that it earned nearly $4 billion in the third quarter, and Chevron made $2 billion. Both were about 50 percent higher than the same quarter last year.

When the year is done, analysts expect both companies to far surpass their 2016 results and keep on earning big profits next year. The relatively small profits that followed the crash in crude prices — Chevron actually lost $497 million last year — appear to be in their rearview mirror.

“We’re a pretty resilient bunch in this business,” Chevron CEO John Watson said on a call with analysts.

Watson said the companies have bounced back partly by responding to lower oil prices by being more selective in their search for new sources of energy. “We really have to focus on the lowest-cost projects and options that we have regardless of the ups and downs” in commodity prices, he said. “That’s what we’re doing right now.”

Spot prices for benchmark U.S. crude ended the third quarter more than 10 percent higher than they were a year earlier. On Friday, benchmark U.S. crude hit a six-month high of nearly $54 a barrel, and Brent crude, the international standard, rose above $60 for the first time since 2015.

Exxon and Chevron both pumped more oil and gas than a year ago but still fell short of analysts’ expectations for production — by about 2 points in Chevron’s case, causing a sell-off in its shares.

Exxon, based in Irving, Texas, reported that third-quarter profit jumped to $3.97 billion from $2.65 billion a year earlier. Income was 93 cents per share, despite a hit of four cents per share from Hurricane Harvey, which flooded Houston and the refineries there in late August.

Exxon does not adjust reported results based on one-time events such as storm-related shutdowns or asset sales. Even with the setback from Harvey, the results still beat the average estimate of 89 cents per share in a survey of analysts by Zacks Investment Research and 86 cents per share in a FactSet survey.

Revenue rose 13 percent to $66.17 billion, nearly $3 billion better than analysts expected, according to Zacks and FactSet.

Exxon’s capital spending jumped 43 percent to $6 billion, partly on the purchase of a petrochemicals plant in Singapore.

Darren Woods, who became chairman and CEO around the start of the year after two straight years of declining earnings, said the quarter’s results represented “a step forward in our plan to grow profitably.”

Chevron, which is headquartered in San Ramon, California, reported that third-quarter net income climbed to $1.95 billion from $1.28 billion a year ago. Chevron reported profit of $1.03 per share, but that included proceeds from an asset sale and write-downs.