Complete shutter down strike observed across GB against imposition of taxes

Decision of collection of taxes withdrawn in GB: Minister 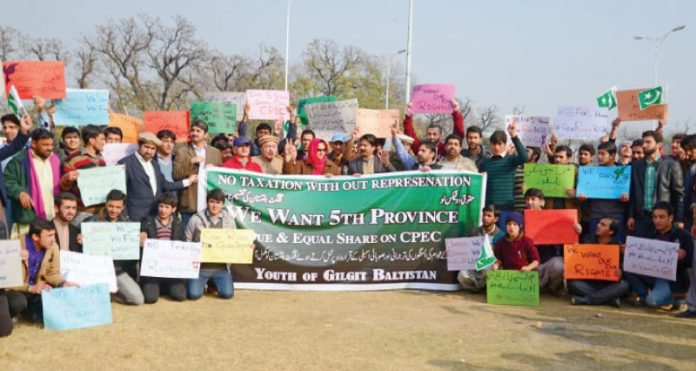 ISLAMABAD: A complete shutter down was observed across Gilgit Baltistan (GB) against the imposition of taxes in the area by Federal Board of Revenue (FBR) without, what the protesters say, determination of the constitutional status of the area.

Following a call from central traders body ‘Markazi Anjuman-i-Tajran’ bar associations, trade unions, contractor, hotel, and petroleum associations, importer and exporter association, chamber of commerce and industries in GB, all commercial, business and routine activities were halted on Monday. All shops, markets, hotels, business centres remained closed across the region; while attendance in private and government offices, education institutions remained thin due to non-availability of transport.

The members of different political parties, civil society organisations etc also held protest demonstrations in Gilgit, Diamer, Skardu, Ghizer, and others districts against the federal government for imposing income tax, withholding tax and others taxes in the area. Being constitutionally disputed territory, the area is exempted from taxation.

In order to record a successful shutter down strike, traders also boycotted import and export business activity between Pakistan and China at Sust Dry Port suspending the bilateral trade at the border.

Besides, lawyers across the region boycotted court proceedings to join hands with the protesting traders. The protesters also announced to continue the protest till the government meets their demands.

Protest demonstrations were held at Yadgar chowk Skardu, Siddiq-e-Akbar chowk Chilas, Gadibagh Gilgit where the protesters were chanting slogans against the federal government and regional government for imposing withholding taxes, income taxes and other taxes on local people before declaring GB a constitutional part of Pakistan.

The protesters said that collection of income tax, general sales tax withholding tax in the area without giving them representation in the parliament was unlawful. Protesters were holding banners and placards inscribing slogans in favour of their demands, the slogans said: “give rights, and then take tax, first accept us as full citizens than impose tax”.

Speaking in the demonstration Markazi Anjuman-i-Tajran Gilgit President Muhammad Ibrahim, Anjuman-e-Tajiraan Skardu office bearer Wazir Iqbal and others claimed that Prime Minister Shahid Khaqan Abbasi during his visit to Skardu on October 25, had announced publicly that collection of unlawful taxes would immediately be stopped. Following the announcement by Prime Minister, traders had called off their protests but the FBR kept collecting taxes even after the announcement forcing the people to come out on the roads again, they said.

Though the regional government held various dialogue sessions with protesting parties to convince them, however, the protesters insisted on issuing notification of suspending the taxes. However, GB council, which reportedly had allowed FBR to impose the taxes, has not issued any notification regarding the suspension of taxes so far.

“Imposition of taxes on GB people is unacceptable until the region is declared a constitutional part of Pakistan and we are provided equal rights same as what is being enjoyed by other citizens of Pakistan,” the protestors said.

GB Chamber of Commerce President Nasir Hussain Raki said, GB while being disputed, should be declared a tax free zone. “We have never denied paying taxes, we are ready to pay taxes but once we are declared part of the country constitutionally,” he added.

As a result of the strike, Works and Law Provincial Minister Dr Muhammad Iqbal and Law Parliamentary Secretary Aurangzaib Advocate said that keeping in view of the wishes and aspirations of masses and GB government’s hectic efforts, the decision regarding enforcement of tax has been withdrawn and process of tax deduction through banks has been stopped from Monday (today) in Gilgit Baltistan.

In this connection, the Federal Government has formally issued instructions to the GB Inland Revenue Department and the same was communicated to all banks working in the province with direction to immediately stop deduction of taxes. They said the PML-N government has completed yet another promise to the people and would not allow anyone or any organisation to take the law into their hands.

They said PMLN Government would take all decisions in the interest of the people of the province. The minutes of the GB Council’s meeting formally approved by the prime minister during his visit to Skardu were released from the office of Inland Revenue Department to all banks working in GB with the direction that no tax would be deducted or cut from Monday onwards.

They said the prime minister of Pakistan has taken this bold decision in the light of recommendations of the provincial government in the interest of masses for which people of GB are very thankful.

They said the collection of taxes under Finance Bill 2015-16 in GB has been stopped in GB that was possible due to continuous and hectic efforts of PMLN Government. Special Assistants to the Chief Minister, Farooq Mir and Abid Ali Baig were also present on the occasion.