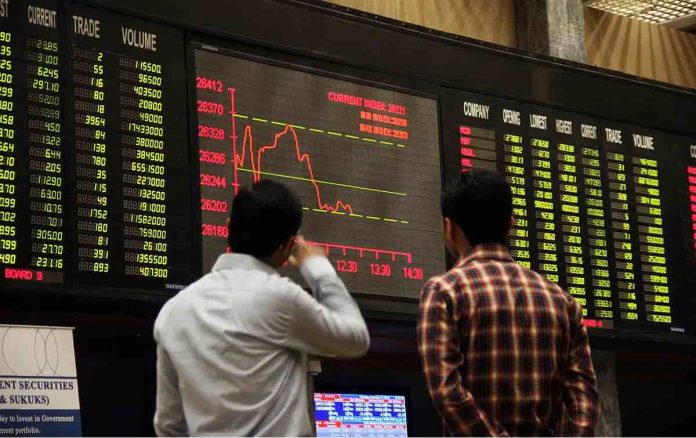 LAHORE: Investors at the Pakistan Stock Exchange (PSX) have not returned from their weekend holidays and volume at the exchange shrunk to below 100 million. It was a dull Monday right from the beginning where the indices traded negative. Out of those traded a total of 205 scripts declined in the session and 115 managed to appreciate.

Total market volume fell from 128.06 million of the previous session down to 87.49 million a clear indication of weak investor confidence. The technology and communications sector gained the highest interest, with 15.47 million shares were exchanged. TRG Pakistan Limited (TRG +5.02 per cent) contributed 13.04 million to the total number of shares traded on Monday. Engineering sector was next, with a volume of 10.68 million. Dost Steels Limited (DSL +1.59 per cent), third on the volume chart, contributed 6.95 million to the total.

None of the sectors could post a plausible gain. The largest sector by market capitalisation, oil and gas exploration sector inched down 0.42 per cent. Oil and Gas Development Company Limited (OGDC) was the only script in the sector to post a positive return of a minor 0.61 per cent. Pak Petroleum Limited (PPL) declined 1.57 per cent and Mari Petroleum Company Limited (MARI) was lower by 1.55 per cent.