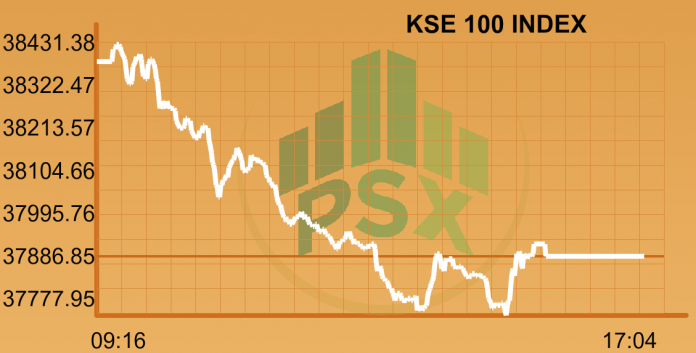 LAHORE: Hunting for a positive trigger, regions worst performer, the Pakistan Stock Exchange (PSX) was at the dearth of volumes again on Tuesday. As a result, the market witnessed its lowest closing of 2017 as investors preferred to sell stocks due to prevailing political uncertainty where political parties appear to be heading for street clashes.

Participation improved as volumes were up 117 per cent day on day while traded value rose 78 per cent. A total of 108.56 million shares were traded during the entire session with 55.91 million in the KSE 100 index scripts.

Amongst the volume leaders was Worldcall Telecom Limited (WTL +0.35 per cent) where 15.79 million shares were exchanged. K-Electric Limited (KEL +0.33 per cent) followed by investors exchanging 11.05 million shares. Next was TRG Pakistan Limited (TRG -4.99 per cent) with a volume of 10.51 million.

The transport sector was top decliner as 4.35 per cent was lost from its market capitalisation. The Refinery sector’s market cap depleted 3.70 per cent and oil and gas marketing sector crumbled 3.37 per cent.