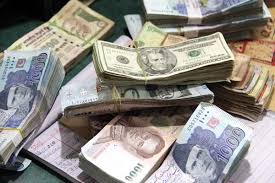 ISLAMABAD: The Finance Division Spokesman has said that the foreign exchange position of Pakistan is stable and the news titled “Pakistan’s net reserves stand at minus $724m” carried by a section of media (dated March 16, 2018) is based on the recently published Post Program Monitoring (PPM) report by the International Monetary Fund (IMF).

He said it is important to mention that Net International Reserves (NIR) position reflects foreign currency assets of the Central Bank as against its liabilities. The story is comparing spot position of foreign exchange reserves with long-term liabilities of the State Bank of Pakistan (SBP), which is not a good comparison as liabilities are to be retired gradually over a period of five to ten years time and not immediately in one instalment. The IMF loan, for instance, is to be repaid by the year 2026 meaning approximately $800 million repayments a year starting from 2018.

The Finance Division spokesman said that foreign exchange reserves do not stay constant. These are built on inflows through earnings from exports, personal transfers, foreign direct investments and earnings of the central banks. Major outflows from reserves are various repayments on account of imports, debt servicing etc. In addition, it may be noted that loans and swaps are part of international reserves of central banks.

He further stated that it may be noted that country’s current foreign exchange reserves are sufficient to cater for debt servicing and import liabilities. Pakistan has never defaulted on its international liabilities and has catered for it liabilities even with lower levels of foreign exchange reserves in the past.  It is also pertinent to mention that when present government took charge in 2013, Pakistan’s NIR was negative $2.5 billion.

He said the decrease in foreign exchange reserves are mainly due to current account deficit of which imports are the main component. It may be observed that imports have shown an unprecedented increase during 2016-17, while exports declined.

The spokesman added that the writers, in fact, have ignored the positive side of fund’s assessment and have focused only on interpreting the potential challenges to the economy highlighted by the fund.

He said the Fund has also endorsed the positive and favourable outlook for economic growth, with real GDP estimated to grow at 5.6 per cent in 2017/18 within favourable inflation environment. The fund has mentioned that the economic growth has continued to strengthen supported by improved energy supply, investment related to the China-Pakistan Economic Corridor, strong credit growth, and continued investor and consumer confidence.

It is important to share some positive trend of the economy during the current fiscal year, he said.

The spokesman also said the government has been able to achieve fiscal consolidation without compromising development expenditures as fiscal deficit has been contained at 2.2 per cent of GDP during the first half of current fiscal year against 2.5 per cent in the same period of FY 2017.

While PSDP expenditures increased to Rs 733 billion during FY2017 over last year and this year the allocation is Rs 1 trillion. FBR tax collection continued to show impressive growth above 17 per cent during July- February, FY 2018. Inflation has been contained at 3.84 per cent during July-Feb, FY 2018 against 3.90 per cent in the same period of FY 2017.

The spokesman further said under agriculture sector, the credit disbursement continued to increase above 42 per cent during July-Jan, FY 2018 over the same period last year. While incorporation of companies also improved above 44 per cent during first half of FY 2018. The credit to private sector has shown an impressive growth above 15 per cent on a Y-o-Y basis as on 2nd March 2018, which suggest that there is strong growth in aggregate demand reflecting productivity in the economy.

- Advertisement -
Facebook
Twitter
Linkedin
WhatsApp
Email
Previous articleBusinessmen will soon be allowed to invest in Australia: Adamson
Next articleAll set to establish Investment Board in AJK