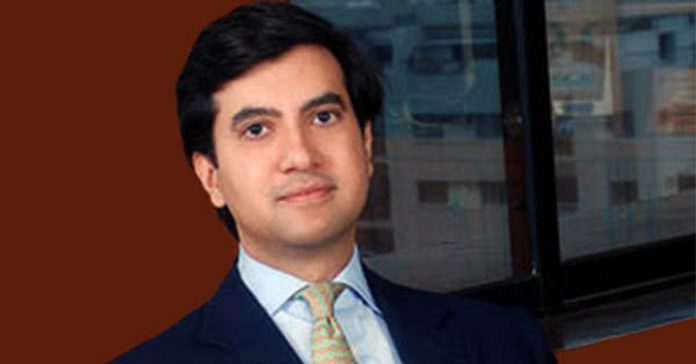 ISLAMABAD: In a surprising development, it has reliably been learnt that the Civil Aviation Authority (CAA) has deposited Rs5 billion of funds, which belonged to the CAA Employees Pension Funds Trust in JS Bank, allegedly at a lesser interest rate, in violation of rules from the Finance Division.

Surprisingly, after the appointment of Ali Jahangir Siddiqui as Special Assistant to Prime Minister Shahid Khaqqan Abbasi, CAA deposited Rs5 billion in JS Bank at the interest rate of 6.25 per cent to favour Ali Jahangir Siddiqui who is said to be a business partner with premier Abbasi in Air Blue, and is also currently facing an investigation from the National Accountability Bureau (NAB) in 19 scandals worth above Rs55 billion accumulatively.

Documents available with Pakistan Today disclosed that on 21 August 2017, a proposal was approved by the Prime Minister, and on 30 August 2017, Ali Jahangir Siddiqui Chairman of JS Bank Ltd and JS Private Equity Management, was appointed as a special assistant to PM Shahid Khaqqan Abbasi. On 22 August 2017, CAA deposited Rs4 billion of CAA Employees Pension Funds Trust in JS Bank for 90 days while later on, Rs1 billion for one year at an interest rate of 6.25 per cent, at least 3 per cent less than the interest offered by other banks for this amount.

Well-informed sources said that although initially, the CAA had deposited Rs4 billion for 90 days in JS Bank, this amount had been deposited at an interest rate of 6.70 per cent in JS Bank for 12 months on 22 November 2017 after the expiry of the initial deal. They said that the CAA, instead of calling bids has once again deposited the heavy amount in violation of Finance Division OM 2003. Similarly, JS Bank, in a bid to achieve its target required more deposits.

On 12 February 2018, Rs1 billion was deposited in JS Bank by CAA for three months at an interest rate of 6.20 per cent to meet the target of Ali Jahangir Siddiqui’s bank (JS Bank), which has caused loss to the tune of Rs13 crore to the pension funds of CAA employees, sources said.

Sources also alleged that CAA made investments in JS Bank with the help and support of PM Secretariat. They said the PM house pressurised CAA to ink a deal with JS Bank as early as possible. They also said that though officials from the finance division pointed out the violation of rules before the Special Assistant to PM; they were verbally instructed to keep silent on this matter as Ali Jahangir Siddiqui was striving hard to make the financial position of JS Bank stable. Ali Jahangir Siddiqui’s JS Bank needed the inflow of funds in order to be in a better position to expand its business in the US and other countries.

It is relevant to mention that this investment by CAA in JS Bank was illegal because it violated the Finance Division’s Office Memorandum No. F.4 (1) 2002-BR.II, dated July 2, 2003. This memo clearly states that public sector enterprises and local /autonomous bodies can deposit their working balances required for their operations with any public or private bank subject to certain requirements that loudly say the process of selection of banks should be transparent, prior to placing deposits with a bank under this new policy, and in case the total working balances exceed Rs10 million, the selection of banks as well as the terms of deposits will be approved by the concerned Board of Directors/Governing Body on the basis of competitive bids from at least three independent banks and the risk associated with keeping deposits should be diversified.

Therefore, in a case where the total working balance of an enterprise exceeds Rs10 million, not more than 50 per cent of such a balance shall be kept with one bank. Similarly, the working balance limit of each organisation should be determined with the approval of the administrative ministry in consultation with Finance Division. The account of this working balance may be maintained in a current or savings bank account. Moreover, it was decided to allow the public sector entities to invest their surplus funds in the non-government securities/TFCs/share also, up to a maximum of 20 per cent of the total funds under the management. Furthermore, the total investment in debt instrument of a company not to exceed 10 per cent of size of the issue or 10 per cent of the total size of funds managed by the public sector entity, whichever is lower.

It is also learnt that CAA has not invited bids as required under the OM of 2003, that the deposit will be approved by the concerned Board of Directors/Governing Body on the basis of competitive bids from at least three independent banks, which is evident from the order issued by CCA to JS Bank to roll over RS.4 Billion at 6.75 per cent interest, for 360 days from 23 November 2017. Likewise, CAA has also not processed the deposits as per OM 2003 mandatory requirement that it has been decided to allow the public sector entities to invest their surplus funds in the non-government securities/TFCs/shares also, up to a maximum of 20 per cent of the total funds under management.

CAA has also violated the requirement that the risk associated with keeping deposits should be diversified. Therefore, in cases where total working balance of an enterprise exceeds Rs10 million, not more than 50 per cent of such a balance shall be kept with one bank. Similarly, CAA again on 12 February, 2018 deposited Rs 1billion in JS Bank for 90 days at 6.25 per cent interest, illegally, in violation of OM of 2003.

Taking cognizance of the matter, Transparency International Pakistan (TIP) has written a letter to NAB Chairman Justice retd Javed Iqbal, CAAChairman, and Registrar Supreme Court, asking for the investigation on the matter and action against the concerned in accordance with NAB Ordinance 199, for misusing the authority to benefit JS Bank.

According to a copy of TIP letter, it (TIP) has examined the allegations and also studied Finance Division Office Memorandum No. F.4(1)2002-BR.II dated July 02, 2003.  The TIP in its letter said that these investments by CAA in the bank of Special Assistant to PM, JS Bank, of Rs 5billion of the Pensions of Employees of CAA is illegal and shall be drawn back and action shall be taken against the responsible for this illegal act, as well as the beneficiary JS Bank, its Chairman and Directors in accordance with NAB Ordinance 199, for misusing the authority to benefit JS Bank.

TIP Pakistan request the Secretary, being the principal accounting officer of CAA to examine the complain and if the allegations prove to be correct, action be taken against the officers responsible for this illegal act in accordance with Section 10 of NAO 1999, said TIP in a letter.

“Prima Facie CAA and JS Bank have committed a violation in the Rs5 billion investment, which was made in an irregular manner and without due diligence and observance of Finance Division prescribed rules, as per the TIP letter.

It is worth mentioning that probe underway against Pakistan’s Ambassador to the US and a business tycoon was allegedly named in 19 inquiries pertaining to corruption, money laundering, and violation of the State Bank of Pakistan’s rules. Ali Jahangir Siddiqui, son of Jahangir Siddiqui, is accused of embezzlement of at least 55 billion rupees and a probe regarding this alleged corruption already in progress with the National Accountability Bureau (NAB), Federal Investigation Agency (FIA), and Securities and Exchange Commission of Pakistan (SECP).