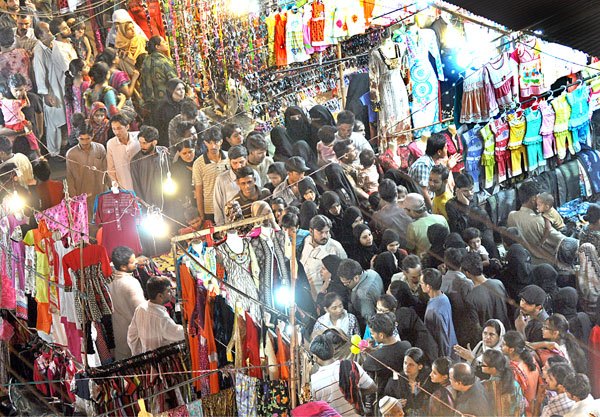 KARACHI: Consumer spending during the occasion of Eid-ul-Fitr this year increased by around 15 percent, breaking the Rs1 trillion trajectory, as repeated heatwaves didn’t dampen customer sentiment across Pakistan.

The rise in spending has been credited to a mix of political, social and economic factors, reported Dawn.

An analyst said irrespective of salaries not rising, an increase in family income has been witnessed and now the concept of a single earning member has been replaced by several earners in households.

Increased awareness because of the internet and television is causing people to budget more proficiently which allows creating the financial space required for expenditures on special occasions.

Mr Khan projected a 20 percent rise in the market compared to last year and shared footfall crossed over a million during Ramazan this year against 830,000 in Emporium Mall last year.

Another market analyst believed another major factor was the public’s buying power. The analyst said people didn’t go out shopping with empty pockets and had a budget for Eid whatever their social status.

The market watcher commented it was unreasonable to compare budgets across various social classes since a small accessory for one individual could cost more than the total Eid budget of a low-income family.

This wasn’t restricted to retail shopping, as according to fintech experts and banker’s online sales also broke records.

However, not everyone agreed with the discernment of a rising Eid economy and some people believed expert opinion was based on simple observations.

He added now it was easy to scope of money movement and determine the total amount of transaction on a given day as compared to the past.

He said making an exact determination wasn’t possible due to the extensive cash economy.