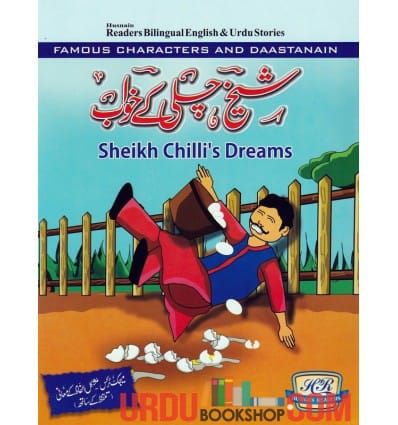 During a casual but intriguing conversation with friends, someone used the term “Sheikh Chilli” in a rather sarcastic manner. This reminded me of my unrelenting admiration of the fabled persona of Sheikh Chilli, which I immediately pointed out. While the South Asian popular culture and folklore looks down upon the mythical character named, calling him a profound loser; I, on the other hand, consider him an inspiration. A misunderstood hero who deserves to be rooted for and appreciated.

So let me reiterate what I may have written earlier as well. The story of Sheikh Chilli as it should have been.

Sheikh Chilli is the main character of a popular folk tale. And as all folk tales go, this tale too has a moral, a moral which seems almost forced and contrived. We are told to perceive the protagonist of the story, Sheikh Chilli as a loser, a character living in a world of his self-created illusions. A person who dreams of becoming rich and famous, while all that he possesses is an egg.

Here is the synopsis of this story. Sheikh chilli once found an egg somewhere on the street. Instead of just making an omelette out of it, he conceives an idea of using the egg to become rich. He thinks, if I can get the egg hatched through a poultry farm, it will turn into a chicken. The chicken will grow up soon, and will lay more eggs. Soon I will have lots of eggs, dozens of them, which will hatch into dozens of chickens. These chickens will lay more eggs, and hence more chickens. And in no time I will have so many chickens, that I will own my own poultry farm.

By careful planning, I will turn the farm into a huge business. One farm will lead to two, then four and soon dozens of farms. I will buy more farm animals, and will become a farming tycoon. Then I will venture into the dairy and fishery business. Integration into food distribution will follow suit, leading to industrialized farm products. I will control the supply for big factories that I will own. The story goes on and on, and Sheikh Chilli carries on dreaming bigger and bigger things, while all that he owns at the moment is an egg.

An egg, which could have been used to make a tasty omelette for breakfast. The moral of the story: Sheikh Chilli was a futile dreamer, living in a world of illusions, and hence a profound loser. Like Willy Loman in Arthur Miller’s classic, Death of a Salesman, an icon of futility and nothingness. We are told that if you happen to come across an egg, just eat it. Anything outlandishly bigger than an omelette is frowned upon. In fact, a person in the real world who thinks bigger than what he owns is given the label of being Sheikh Chilli.

I am usually annoyed with such stories. I believe that such Eastern folk tales and their morals are forthrightly dangerous. To me, Sheikh Chilli should have been perceived as an inspiration. Here was a man who dared to think big and out of the box.

I believe we need to retell the story of Sheikh Chilli. It can be the same story, but in a different tone and with a more pertinent moral. After all, it’s almost human nature, and a necessity to have Chilli’s soul among us. We need to conceive new ideas, regardless of how little we have. If we look at today’s tech driven world, there are thousands of very successful Sheikh Chillis around us. People who had an idea, and simply, probably fearlessly, went down to implement it into something big. From a garage based setup to Apple Inc, from a hostel room with a computer to Facebook, from a fisheries business to Samsung Electronics. from a newspaper hawking job to Virgin Megastore, Virgin Air and Virgin Galactic.

It’s the spirit of Sheikh Chilli that drives big ideas . Sadly, in our part of the world, we are used to, and content with, a set formula to success. Get into a good school, become a doctor, lawyer, banker or engineer. Think small and steady. Don’t venture out of the box. Don’t run too fast… There’s another folk take of a rabbit and a turtle which is equally dangerous but that’s for another day. We are told that Sheikh Chilli never really achieved what he dreamt of.

What we are not told is that Sheikh Chilli, in reality, did become successful. In fact, a vast number of successful personalities in every field, whether business, science, or sports, started off as bare handed, wide eyed, fearless, Sheikh Chillis. All that they did was to act after they idealized, with honest hard work.

We can learn a thing or two from Chilli’s story. If nothing much, just the bit of not being afraid of coming up with big ideas and trying to implement what an enterprising brain dreams up every now and then. Sheikh Chilli can be a catalyst of innovation and introspection… an inspiration.

So here’s to all those out there, who are, or ever were, or will be, Sheikh Chilli. Never stop dreaming!