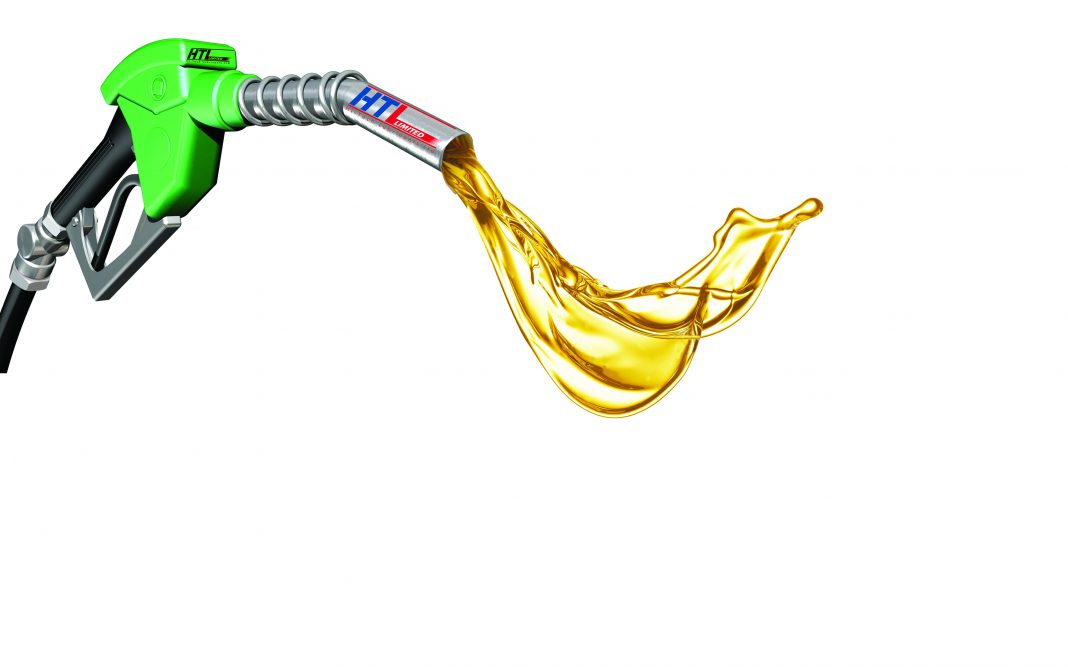 The most noticeable thing about Hassan Tahir is how much he sounds like the CEO of a luxury brand rather than of a lubricant manufacturer and distributor. He thinks about the details of his customers’ experience with his product in a way that most oil company executives simply would not. For him, it is not simply enough that he sells a high-quality, high-margin product. His customer’s experience in buying it must also be a pleasant one, and he goes through the details at considerable length as to how he plans on making that happen.

That high-end, luxury mindset is apparent in other ways, most notably in the location of our interview. Hi-Tech Lubricants (HTL), the company Hassan founded and has been running for the past 20 years, is headquartered in one of the poshest neighbourhoods in Lahore, in GOR-I, the enclave of Pakistan’s most powerful serving civil servants. The building is located adjacent to the elitist Punjab Club, an old colonial establishment that still does not allow entry to just any upstart – blackballing him to his grave – and looks down with unalloyed contempt at the likes of Lahore Gymkhana.

This is not the kind of place one normally thinks of when one imagines what the headquarters of a lubricant company would look like. Jewelry store, or luxury watches, maybe. Definitely not lube.

Yet perhaps that luxury sensibility is not altogether out of place for Hassan Tahir. Lubricants, after all, a high-margin, low-volume business, much like luxury goods, and quality and branding matter far more than in the fuel oil business.

“Ours is not a me-too product,” said Tahir, in an interview with Profit. “It is a totally different product altogether because you have a higher oil drain interval (ODI), where if you are changing oil after 3,000 kilometres with other brands, we recommend 4,000, 6,000, 8,000, and sometimes even 20,000 kilometers. So, your cost per kilometer comes way down even though we are more expensive up front. We give you more protection of your car, we give you fuel saving so that is a very unique proposition.”

But alas, growth in the lubricant business for a standalone operator is proving to be quite difficult for the company, and so it finds itself moving towards the fuel oil business, a transition that is likely to fundamentally transform Hi-Tech Lubricants. It comes at a time, however, when many other companies are already in the midst of their expansion into the oil marketing company (OMC) business. Is Hi-Tech jumping in at the wrong time into the wrong market?

Hassan Tahir does not think so. “The market is growing, and the opportunity is there,” he said. “The players that can differentiate themselves [in the market] will be profitable. We have a customer base that is using our product and using the HTL service centers. So, we have a unique value proposition to offer.”

This is not the first time Tahir has managed the company’s transition, and if his track record is any indication, his competitors would do well to take HTL’s foray into the OMC market seriously.

From trading to manufacturing

Tahir founded HTL in 1997 as a trading business, buying lubricants from Yu Kong Lubricants (now known as SK Lubricants) based in South Korea. The company started off in the Lahore market, and created a sales team dedicated to educating the Pakistani driver about the benefits of using synthetic lubricants.

For the first three years, the company remained largely confined to the Lahore market. In 2000, it expanded to Islamabad and Karachi, and over the next decade or so, the company continued to expand its operational footprint throughout Pakistan. The company created the brand name ZIC, which rapidly became one of the better known brand names in a market otherwise dominated by Shell, and Chevron’s Caltex brand.

It was not until 2013, however, that the company ventured into its own blending operation, which it set up in the Sunder Industrial Estate on the outskirts of Lahore. In order to finance the Rs2.5 billion project, HTL raised equity through its initial public offering (IPO) on the Pakistan Stock Exchange (PSX), which it completed in 2016.

“We took the company public in 2016 and the IPO was oversubscribed 3.5 times,” said Tahir. “We raised Rs1.8 billion from the market, primarily because we wanted to expand into the retail segment of the lubricant and fuel market of Pakistan.”

Why expand into retail fuel

“So, the whole idea was to increase our footprint in the Pakistani market,” said Tahir. “Our competition did not take us seriously until we set out our own blending plant in Lahore. The next step is getting into the OMC market because it is a very symbiotic market. The two markets facilitate each other, particularly on the institutional side.”

“If we talk to the textile companies, or the cement companies, or the big manufacturing giants, what they do is they have contracts with fuel suppliers who club together not just the fuels but also the lubricants to be used by the companies. So if we try to sell our lubricant to, for example, a big independent power producer (IPP), they say that they cannot buy our product because it might cause a disruption in their relationship with the fuel suppliers. So the only way to capture the industrial business is by becoming an OMC ourselves, which is what we are now doing.”

Flush with the cash from its public listing, HTL has a somewhat aggressive schedule in terms of its plans to expand into the OMC business. “We are currently on track to open up 100 outlets by 2019, then another 100 outlets by 2020, and we want to get to having 360 outlets within the next five years,” he said. “That is the plan. We are going on track and hopefully, the way we have projected our numbers, we are almost at par on what we want to do.”

At that size, HTL would become a medium-sized OMC, surpassing Byco Petroleum and possibly even Hascol in terms of size. But it would also allow HTL to create the kind of national level footprint that might allow it to gain a firmer foothold in the institutional sales segment of the fuel and lubricant business. It would also significantly bolster the company’s revenues, which may give it the kind of cash flows it would need to keep growing in the market.

The problem with the OMC market is just how crowded it has become over the last year and a half. In the first 70 years of Pakistan’s existence, the government gave out just 20 licences for oil marketing companies. In the year since then, the government has given out 21 such licences. 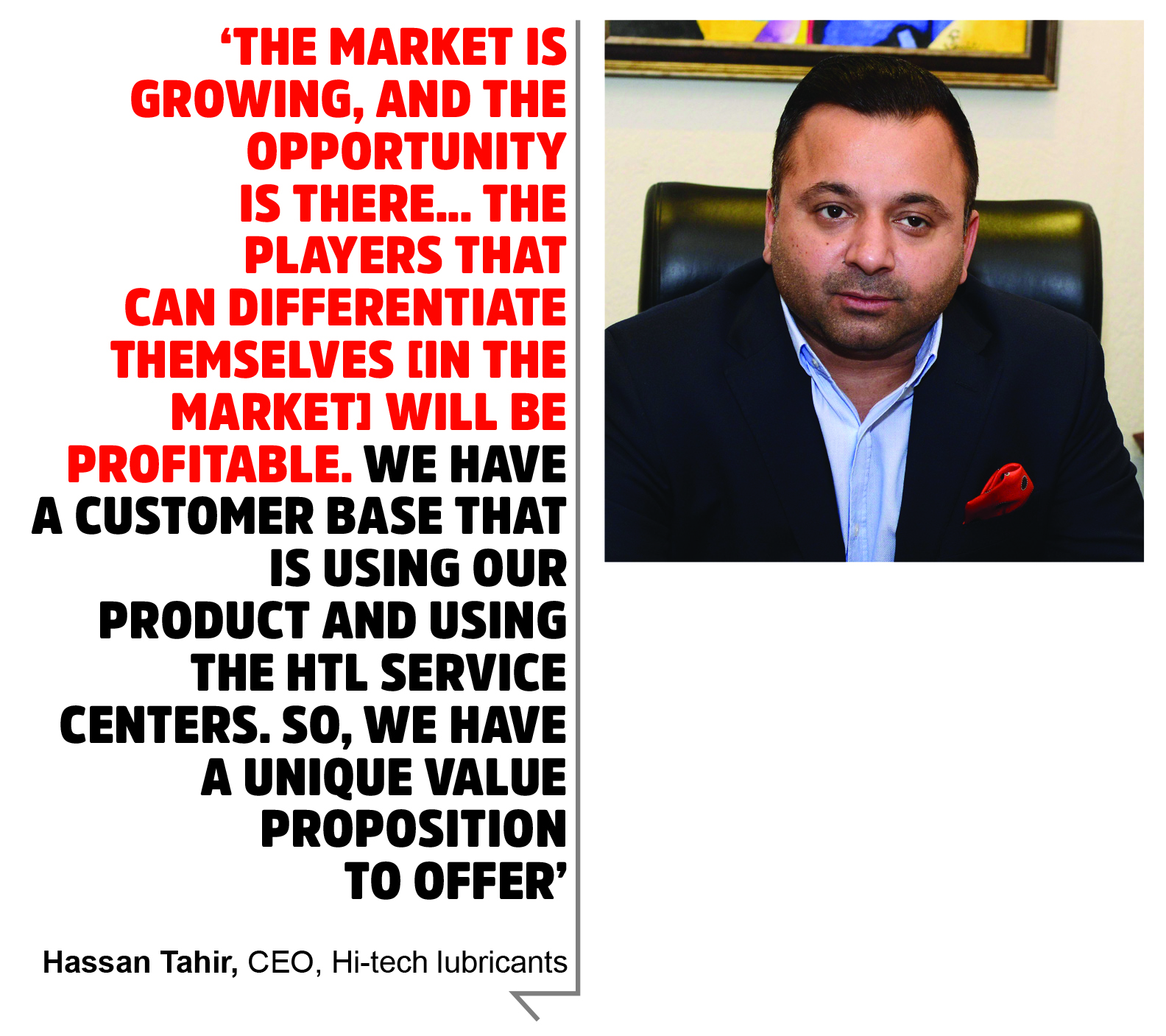 The reason for the sudden influx of licences was the government’s decision to lower the minimum paid up capital requirements to get an OMC licence. In years past, the amount had risen to Rs3 billion. In 2017, however, that number was lowered to Rs100 million, which led a large number of companies to apply for a licence, and many were granted such a licence.

After giving out so many licences, however, the government appears to be ready to backtrack, and has raised the minimum paid up capital requirements for an OMC back up to Rs3 billion, and may raise it even further to Rs7 billion, though all companies who have current licences, including the new ones, would most likely be grandfathered into the new regulations, so they would only affect any new companies seeking to enter the market.

“The reason why the government wants to raise the amount [of minimum paid up capital] is that it wants only serious players to come in,” said Tahir. “The person who is coming in by showing Rs100 million, he can also come in by showing a bank guarantee. But now government is saying that there should be Rs3 billion of capital in your company, which is much harder to raise. People come and misuse their license. They don’t build proper storage, they don’t create fuel stations, and they make losses for their investors. So, the government wants serious players to come in. I don’t mind. They say that you cannot open a pump unless you have storage. Which is right.”

In order to differentiate itself from its competitors, HTL plans to have standardized convenience stores at all of its retail outlets, which it believes will help drive traffic to its outlets relative to others.

“If the mart is placed at the right place, there is a lot of potential,” said Tahir. “The company will control the marts and we will run those marts and make sure that the dealer makes margin on that, rather than charging them a rental on monthly basis. This will allow for standardization. So if you go to a PSO mart, you will see the placement of shelves are pretty different from in Karachi from what it is in Peshawar, or Lahore. There is no standardization. But if you see McDonalds, you will see standardisation across the country. Standardisation is the key.”

Another key part of the offering for HTL is to create the expectation of cleanliness at petrol pumps amongst its customers.

“Cleanliness is our number one priority for our fuel stations and even for our express centres,” said Tahir. “If you see our express centres, you will see how clean they are. I feel that owner drivers don’t get good clean places to sit and wait, especially female drivers who go to these oil change centres. They usually just sit in their cars with the air-conditioning on and they don’t get off and go to a place to sit because it is so dirty. So, we have created that environment in our centres. Similarly, we have to create a good environment for our retail outlets.”

Yet despite the significant competition that may come from these new entrants, Tahir does not appear to be worried. “A lot of these companies do not care about location or traffic. We rejected as many as 50 locations because either they were bad or would not have enough traffic. If your dealers do not have good traffic, you cannot grow your business. But these new guys: all they want is the Rs400,000 franchise fee cheque from their distributors and they do not care about anything else. That is not how you grow your business.”

However, it is not all smooth sailing yet for HTL, whose OMC licence is still pending, in part due to a safety inspection that has yet to be completed. “Once we can show all of our safety procedures, we can get a licence from OGRA [Oil and Gas Regulatory Authority]. We need to get up to nine different licences to set up an OMC, including one from the ministry of defence,” said Tahir.

Other ways of growing the business

In addition, HTL is also growing its storage capacity so that it can expand aggressively in the oil marketing company business, without which it would be impossible to compete against the likes of Hascol, which has a robust storage infrastructure. “We have bought six acres of land in Khyber-Pakhtukhwa to build a 2,500 ton storage facility,” said Tahir. “We are also creating storage facilities in areas such as Mehmood Kot, Maachikeh, Shikarpur, where we are entering into partnerships with different companies.”

The company is also helping its dealers – the people who actually own and operate its petrol pumps – to finance their working capital. “We are getting financing for our distributors from Meezan Bank and Bank Alfalah. The distributors are having a problem with their cash cycle because we are pushing diesel and motorcycle oil, which have longer credit cycles. In the gasoline segment, you get paid in seven days, 15 days, or a maximum of 21 days. Not so in diesel and motorcycle oil, where 20 to 30 day cash cycles are common.”