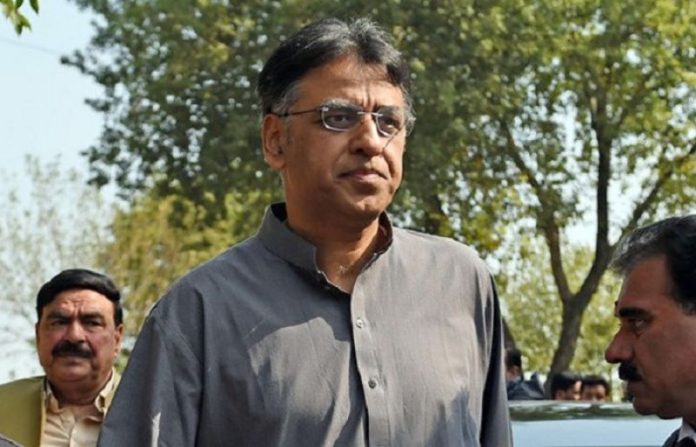 ISLAMABAD: Federal Finance Minister Asad Umar on Friday said that his government will look at all options, including going to the International Monetary Fund (IMF), given the economic situation of the country.

Giving remarks during a TV interview on Friday, the finance minister said, “I would like anyone to find any answer besides the one I am about to give — we will look at all options including going to the IMF given the situation, after which I will give my recommendation to the prime minister, who in turn can decide to act upon it or look to other avenues.”

The finance minister also warned against the potential difficulties the country could face if the oil prices in the global markets do not stabilise soon.

Answering a question about the perceived crunch that 1.3 million people, who are already giving taxes in the country, have been put into with increased taxes imposed on them, Umar said, “I have another bad news for you, there are only 1.3 million filers, out of which only around 0.7 million actually pay taxes.”

He clarified that the government never levied additional taxes on these taxpayers. “Whenever people meet me they say you have been very cruel,” he added.

Umar said the government has started to catch those people who do not pay any taxes but buy vehicles worth millions, adding that the Federal Board of Revenue (FBR) will see to this, and bring those people into the tax net.

“Initially, FBR is going to catch the top 100 people who have bought the most amount of land and cars, but are not filers and do not give taxes. This will be done over the span of a few weeks after which in a comprehensive exercise people who have lavish lifestyles, as in travelling in the business class etc will be identified,” he said.

On a query, he said, “The visit to Saudi Arabia was symbolic. The three grants were already in the pipeline. The visit showed the world that there is progress being made in the relationship between the two countries.”

In response to a question regarding criticism on his (finance) ministry, he said, “For four years they (PML-N) did not make any decisions about gas. They wreaked havoc with the department.”

He said the past government did not take any action on the electricity department for years. In the past 30 days, the incumbent government has taken clear decisions on all the matters it has touched upon, he added, defending the government’s performance.

Moving on to the taxes levied on Liquefied Petroleum Gas (LPG), Umar pointed out that there was previously a 30 per cent tax imposed on LPG which has now been reduced to 10 per cent, “in view of the fact that it is a commodity widely used by the common man”.

The minister said that National Electric Power Regulatory Authority (NEPRA) had attempted to increase the price of electricity but “we stopped them, asked them to submit to us their plan and their past performance first before we can allow them to increase prices”.

Responding to a query regarding the government’s plan on facilitating online purchases through the use of a global payment system, the finance minister said, “A platform like PayPal or its equivalent is required in the country for the immensely talented youth to be able to do online business.”

Expressing regret on the Supreme Court’s verdict regarding PTI leader Jahangir Tareen’s disqualification, the finance minister said, “I am very sad about this verdict of disqualification on a personal level. However, it is a court order and we respect that. I have not worked with a minister better than Tareen.”