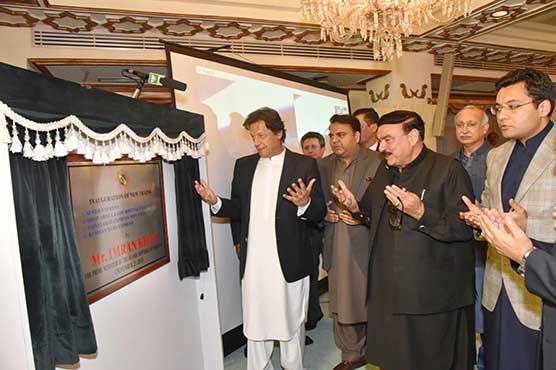 ISLAMABAD: Prime Minister (PM) Imran Khan on Friday said that nepotism and corruption had marred government institutions which is why the incumbent government was pursuing policies of merit and transparency in the process of recruitments.

Addressing a launch ceremony of four new trains here at the PM Office, the prime minister said it was the people who bore the brunt of corruption and political appointments.

It is pertinent to mention that the Ministry of Railways had set a target to launch ten new trains within the first 100 days of the new government by using local resources and manpower.

The prime minister lauded the Railway Ministry for increasing the revenue by Rs 1.5 billion in three months. He said that the uplift of railways was vital as it was the transport of the poor. “Countries like China excelled because they had invested in the welfare of the poor and that was also the concept of the State of Madinah,” he added.

The premier said that China had made history by steering 700 million people out of poverty within just three decades and Pakistan, too, would soon emerge as the world’s biggest economic powers.

He said that all of the policies of the incumbent government revolved around the welfare of the common man. “Unfortunately, no previous government focused on the expansion of railway track since the country’s inception and it is for the first time that the government is bringing investment for railways,” he added.

The PM told the gathering that the travel duration from Lahore to Karachi would reduce to eight hours after completion of the ML-1 project. He said that the government had maintained the confidentiality of bilateral agreements with China, however, enemies of the two countries had perceived the magnitude of cooperation and attempted to sabotage it through an abortive terrorist attack at the Chinese Consulate in Karachi.

He paid homage to the security forces which thwarted the attack and blocked entry of terrorists inside the building.

The prime minister said that government corporations were inflicting loss worth Rs500 billion to the national exchequer earlier. “Railways loss reduced from Rs45 to 37 billion, PIA faced a loss of Rs400 billion, Rs1,200 billion was lost by the power sector, Rs150 billion was wasted by the gas sector and Pakistan Steel Mills was simply lying dysfunctional,” he said while adding that all of this happened consequently to political meddling, over-staffing and appointments in violation of the merit.

PM Imran directed the railways’ minister to remove those who had been recruited against merit.

He said that land belonging to the railways was under illegal possession and the government had decided to utilise that land to generate revenue.

He expressed his pleasure over the active participation of railways in the ‘Clean and Green Pakistan’ campaign and reiterated to inculcate the subject in the educational curriculum in order to sensitise the young generation.

Earlier, Railways Minister Sheikh Rashid had said that around 50 million people travel through train in Pakistan, therefore, ten new trains had been developed indigenously without spending any additional amount and the number would be increased to 12 by January next year.

He said that a Chinese team had arrived in Pakistan to discuss the ML-1 project. “Anti-state elements attempted to undermine Pakistan-China relations but our security forces successfully foiled the attempt,” he said.

He told the gathering that divisional headquarters had been equipped with wifi and tracking systems were being introduced in trains which would save Rs1 billion.

Talking about the land mafia in Karachi, he said that the Ministry of Railways was retrieving its land which was being used by schools or as playgrounds as tenders had been floated to run railways schools and hospitals under public-private partnership.

The minister further said that two freight trains were ready for operations. Terming railways as the backbone of the China-Pakistan Economic Corridor (CPEC), Sheikh Rashid said that a curved portion of railway track between Gojar Khan and Jhelum would be straightened to reduce the travel duration from Rawalpindi to Lahore by 50 minutes.

He concluded by saying that the ministry had slashed its budget by 15 per cent and planted around 250,000 saplings under the Clean and Green drive.