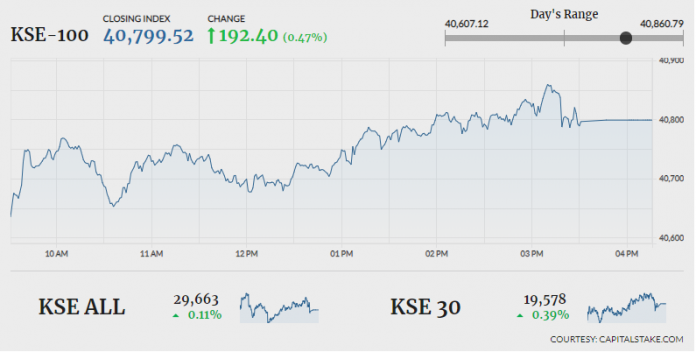 KARACHI: After early morning bumps, the Pakistan Stock Exchange (PSX) managed to stand its ground to end the session positive on Thursday. Indices traded in green for the most part of the day while volumes improved significantly.

The State Bank of Pakistan announced its monetary policy after the market hours. Interest rate has been increased by another 25 basis points (from 10pc to 10.25pc) in a bid to control the mounting fiscal deficit. Although this is in line with the expectations of economic analysts, the market analysts thought it would remain unchanged. The rate was hiked by 4.25pc in the last calendar year.

The Saudi crown prince is expected to visit Pakistan on February 16 to participate in an international investment conference. Furthermore, the Oil and Gas Regulatory Authority (OGRA) recommended a reduction of Rs4 per litre in the price of petroleum products.

Colgate-Palmolive (Pakistan) Limited (COLG +0.00pc) declared its financial results for the second quarter of fiscal year 2018-19 (FY19). An interim cash dividend of Rs16.50 per share was also announced by the company. Sales increased by 17pc YoY, while earnings per share increased from Rs14.79 in the same period last year to Rs15.70.