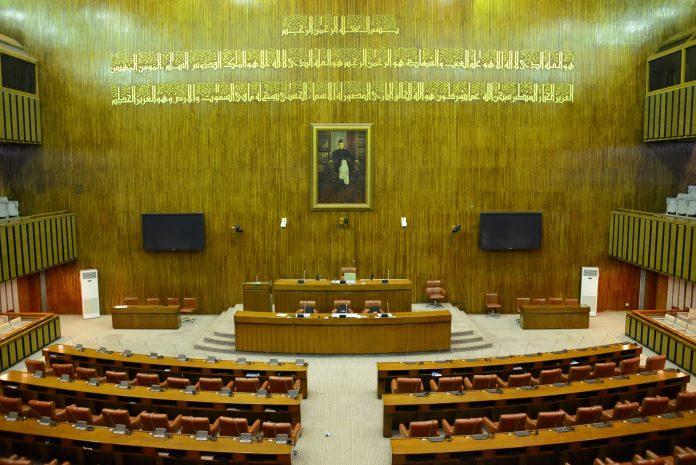 ISLAMABAD: The Senate on Friday adopted recommendations of its Standing Committee on Finance, Revenue and Economic Affairs that the three per cent share of National Finance Commission (NFC) Award should be given to erstwhile FATA and an interim relief allowance of ten per cent of basic salary might be granted to all government employees, keeping in view current price hike in the country.

The Senate recommended to the National Assembly that tax on coal being extracted from the province of Balochistan should be reduced in view of the difficulties and overhead expenditure in extracting coal from the mines of the province.

The Senate also proposed that Rs5 billion should be released by June 30, 2019 to the province of Balochistan for construction of the check and small dams in the province. The house also recommended that the custom duty on Crude Degummed Soy Oil (CDSO) be increased to Rs15,000 metric tonne in order to bring it in line with its replacement products and support local production of those products.

recycled materials like lead under Duty and Tax Remission for Exporters (DTRE) scheme for not allowing Pakistan as dumping ground for hazardous metals from all around the world.

The Senate also recommended that the government should devise an immediate claim release mechanism to support non-textile exporters. It was also recommended that in order to improve the existing infrastructure of Sui gas and electrical lines in district Haripur, an allocation of Rs100 million should be made.

The house also recommended that a 132MW grid station should be established in district Kohistan at the earliest to meet the increasing demands of power consumption, besides meeting demand of Dasu and Rai Kot for power consumption.

The house recommended that the road should be widened from Havelian to Abbottabad as soon as possible in order to avoid extreme road blockage, causing inconvenience to the general public. The Senate further proposed that the construction process of Motorway from Shah Maqsood to Thakot should be completed and opened for general public.

It proposed to the National Assembly that work on Babusar Tunnel as announced by the former prime minister, should be completed at the earliest.

The Senate recommended the completion of New Gwadar airport at the earliest besides proposing low capacity Hydel projects, producing one to four megawatts in Khyber Pakhtunkhwa and throughout the Northern Areas, besides upgradation of electricity supply system in the Hattar Industrial estate that generates about Rs70 billion tax.

The Senate recommended to the National Assembly that an allocation of Rs300 million should be made for the year 2018-19 in respect of Naltar Expressway Gilgit at a cost of Rs2,626.872 million.

The Senate recommended that an allocation of Rs200 million for the year 2018-19 should be made in respect of 50-bed Cardiac Hospital, Gilgit, having a cost of Rs1,513.304 million.