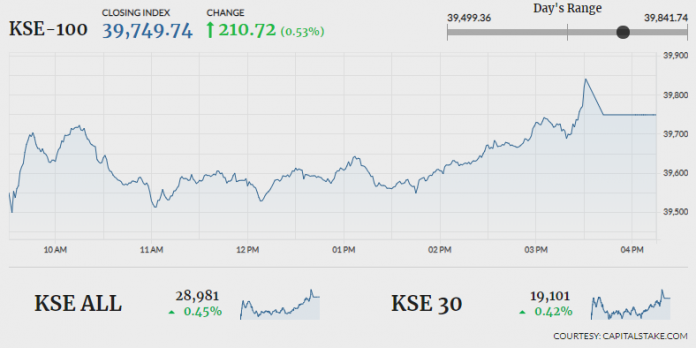 KARACHI: Positive sentiments surrounded the bourse on the first trading session of the week, as the indices that opened red changed their path to close in green. Foreign investors ended last week as net sellers with a net outflow of $1.33 million.

On the economic front, inflation touched its 56-month high at 8.21pc in February 2019 as compared to 3.8pc in the same period last year. The increase was mainly due to higher utility bills, increased cost of education, healthcare, transportation and communication etc.

As per news reports, the federal government is likely to withdraw 4pc supertax imposed on the banking sector for the tax year 2018. Previously, the banks had asked the government to remove the tax in the second mini-budget released in the third week of January.

The overall trading volumes were recorded at 168.446 million. The Bank of Punjab (BOP +7.82pc) led the volume chart with 90.84 million shares following the announcement of its financial results for the financial year 2018. A final cash dividend of Rs0.75 was also declared by the company. Sales appreciated by 35pc YoY, while earnings per share improved from Rs-1.62 last year to Rs 2.86.