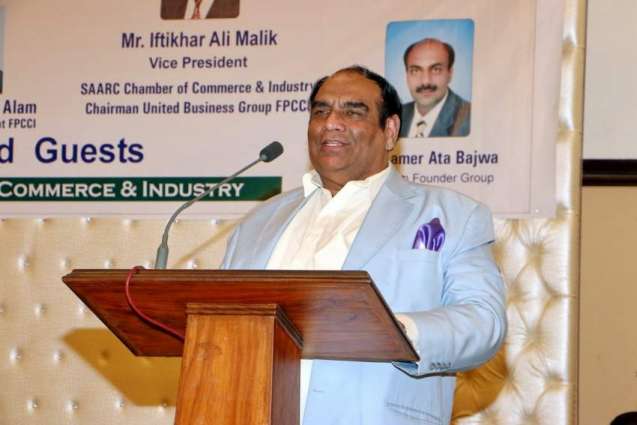 Talking to a 10-member delegation of Pak-Malaysia traders, SAARC CCI Senior Vice President Iftikhar Ali Malik noted that Pakistan was the second largest trading partner of Malaysia in South East Asia last year, adding that both countries should make efforts to take these relations to a new level by aggressively exploring opportunities for joint ventures in various sectors.

He said that the current increase in bilateral trade between Pakistan and Malaysia followed the signing of a Free Trade Agreement between the two countries in 2007. “But Pakistan’s share in bilateral trade is only $257 million, which has tilted the balance of trade heavily in favour of Malaysia,” he deplored.

The SVP stressed the need to address this imbalance through an increase in the export of Pakistani products to Malaysia.

The Pakistani business community wants to strengthen trade ties and explore new bilateral trade prospects with Malaysia, he stated. “We believe Pakistan’s improved relations and enhanced trade with brotherly countries like Malaysia would ensure prosperity and create a win-win situation for both the countries,” he remarked.

Malik said that Malaysian companies can choose between setting up a liaison office, branch office or incorporate a Pakistani company as either its wholly-owned subsidiary or joint venture with a Pakistani/overseas partner.

He opined that there was a huge potential for joint ventures in the areas of Islamic finance, Halal food industries, energy, low-cost housing, infrastructure development, telecommunications and education.

He also proposed holding a dialogue with the business community of both countries in order to make room for more agreements and to launch new initiatives.

Malaysia and Pakistan enjoyed warm and friendly relations since 1957, he said, adding that both the countries shared a similar position on regional and international issues through their common membership in the Non-Aligned Movement (NAM), Organisation of Islamic Conference (OIC) and G-77 organization.

In addition, he said, Pakistan is also a sectoral dialogue partner of ASEAN and a member of the ASEAN Regional Forum (ARF).

“Malaysia and Pakistan have new governments. Both share a common vision of eliminating corruption and promoting good governance within the public and private sectors,” he opined. “These similarities will present numerous opportunities for further collaborations between the two countries.”

He said that Pakistan is the most suitable country for direct and indirect investment and Prime Minister Imran Khan has offered one the best package of incentives to all foreign investors, besides announcing a liberal visa regime to attract tourists and investors.

“The economic corridor will not only provide China with cheaper access to Africa and the Middle East but will also help Pakistan earn billions of dollars for providing transit facilities to the world’s second-largest economy,” he concluded.