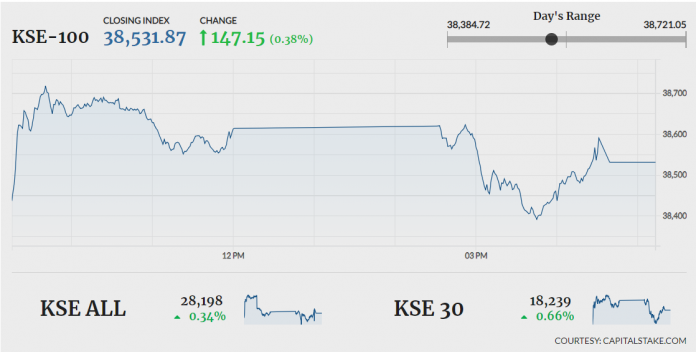 According to the latest data published by the State Bank of Pakistan (SBP), foreign exchange reserves held by the central bank inflated by 8.81pc on a weekly basis and were recorded at $8.84 billion. The bank recently received $1 billion as part of a financial assistance package from the United Arab Emirates.

Moreover, as per reports, Pakistan is all set to receive $2.1 billion loan from China in the coming week. The injection of funds is expected to increase foreign currency reserves to double digits after almost a year.

The market volumes were recorded at 84.64 million. Pakgen Power Limited (PKGP +5.33pc) led the volume chart with 12.37 million shares exchanging hands following the announcement of its financial results for FY18. A final cash dividend of Rs1.50 was also declared by the company. Its sales declined by 17.9pc YoY, whereas earnings per share increased by 13pc from Rs3.53 in FY17 to Rs3.99 in the current year.

Among other market development, the prime minister, in a conversation with a group of journalists, said that Exxon Mobil, a major oil company drilling in Arabian Sea, is in final stages of its exploration and would soon give “good news” to the country.