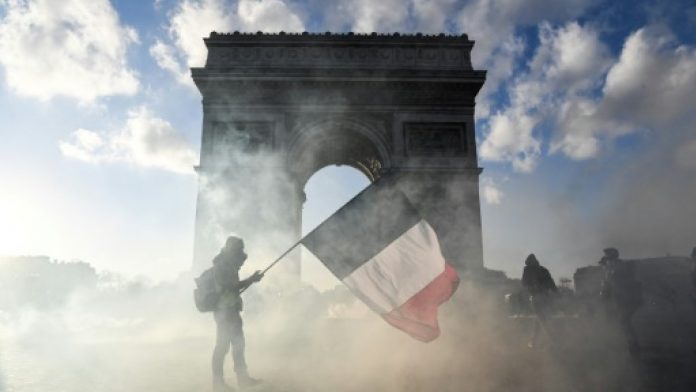 The deficit was lower than the government’s forecast of 2.6pc and came as Insee revised upwards the shortfall between spending and revenue for 2017 to 2.8pc of GDP, from a previous estimate of 2.6pc.

“By stabilising public debt and reducing our deficit to 2.5pc — more than had been forecasted — in 2018, we put an end to the steady drift of our public finances for over 10 years,” Economy Minister Bruno Le Maire wrote on Twitter. “We will continue the recovery of our accounts while continuing to lower taxes!”

But it noted that household spending power — the main complaint of the “yellow vest” demonstrators who have staged weekly demonstrations around the country since mid-November — had fallen in 2018.

On coming to power in 2017, President Emmanuel Macron immediately set about trimming the deficit to bring it in line with an EU limit of three per cent of GDP, which the eurozone’s second-biggest economy had persistently flouted for a decade.

But in December he was forced to loosen the state’s purse strings again to try appease the anger of the “yellow vest” protests who took to the streets over the falling spending power of the working poor.

The 10-billion-euro ($11.4 billion) package of emergency measures for low earners gave the economy a boost.

But the extra spending is also forecast to tip the deficit over the 3pc mark again this year.