Iran metal exports may be harder to sanction than oil, experts say 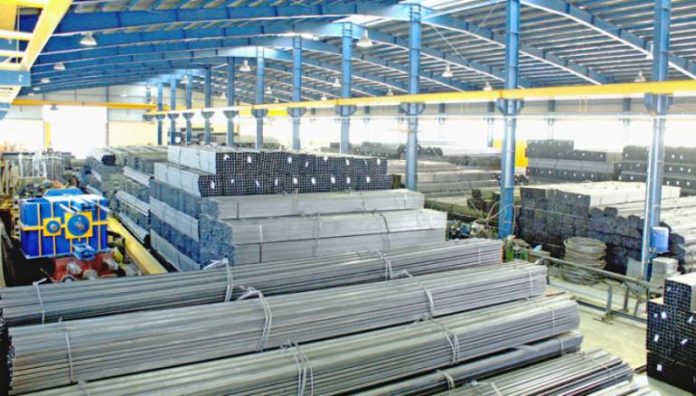 TEHRAN: Iran, hard hit by US sanctions on its oil sales, now faces restrictions on metals exports — but industry insiders say foreign income from mining and steel will be harder to curb.

Tensions are soaring a year after Washington withdrew from a multilateral 2015 deal over Iran’s nuclear programme.

A US aircraft strike group is heading for the Gulf and Tehran has said it will stop abiding by some restrictions on its nuclear activities.
US President Donald Trump last week imposed sanctions aimed at punishing anyone who buys or trades in Iranian iron, steel, aluminum or copper. That came after Washington in November re-instated sanctions aimed at slashing the Islamic republic’s oil exports, by far its top source of foreign currency.
But the steel and mining sector, Iran’s second-largest source of foreign revenue, may prove harder to target.
Relatively decentralised, made up of small and medium-sized companies and selling mostly to nearby countries, it is less vulnerable to sanctions, experts say.
“The US cannot completely stop exports. Some countries, companies with no US ties, are OK to work with Iran,” said industry analyst Mojtaba Fereydouni. “Also our main export markets are our neighbours — Iraq and Afghanistan, and recently Syria and Oman.”
He pointed out that Iranian metals firms, no strangers to sanctions, were relatively unscathed by an initial tranche of restrictions re-imposed last year. “In August, steelmakers were barred from importing essential raw materials and any trade in steel products… yet exports are up for the year,” he said.
According to official data, Iran’s mineral exports grew about 20pc year-on-year to $6.2 billion in the 12 months to March, with steel making up over two-thirds of that figure.
Sector Cushioned

Another industry official, Amir Sabbagh, said that while metals firms will face extra costs, they will be “manageable” as the country’s weakened currency has made exports more profitable.

Iran’s rial has lost more than 57pc of its value against the dollar on the black market in the last year, making exports more lucrative.

Sabbagh, an official with a state-owned mining firm, wrote on Telegram that the sanctions’ main impacts would likely be to increase sea freight costs and reduce exporters’ bargaining power.

The sector could also be hurt by banking sanctions re-imposed by Washington in November.

Analyst Henry Rome warned that this could hurt Iranian importers who buy many of their raw materials from states further afield such as China, South Korea, Kazakhstan and Russia.

“The financial sanctions will choke off at least some of these relationships,” said Rome, a specialist on Iran sanctions for the Washington-based Eurasia Group consultancy.

But Tehran-based economist Ehsan Soltani said minerals firms may be cushioned by the fact that their revenues, particularly from steel shipments, rarely make it back to Iran’s financial system.

Instead, they are largely kept outside the country to pay for imports.

Steelmakers say they keep the money outside Iran in order to pay for raw materials, arguing that they cannot bring it into Iran due to the banking sanctions anyway, Soltani said.

Despite these factors, analyst Rome warned that potential factory closures and job losses would increase pressure on the government.

Mining employs 200,000 people directly and thousands more in downstream businesses, according to Soltani.

But Fereydouni said the industry could be protected by the fact the government retains a majority share in most major companies, while smaller, downstream firms can fly under the US radar.

“Major companies… are still quasi-governmental and therefore will not lay people off under any circumstances” for fear of the political and social consequences, he said.

Ultimately, he added, sanctions are “nothing new” for Iran’s mining industry.

“We have always been sanctioned. Sometimes less, sometimes more,” he said.