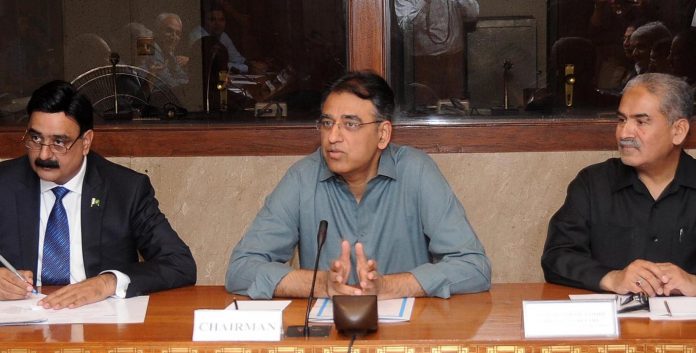 Following his appointment as chairman of the National Assembly’s Standing Committee on Finance, Revenue and Economic Affairs on Monday, former finance minister Asad Umar said that the bailout agreement reached between Pakistan and the International Monetary Fund (IMF) should be presented before the parliament, a private media outlet reported.

He said the government has to take practical measures in order to reach an agreement and therefore “the government should be questioned regarding this accord.”

Umar also vowed to inform the public about the discussions he had with the IMF regarding the programme before his ouster.

“What discussions were held with the IMF (and) what we have achieved through the programme … I will tell the nation about this,” Umar said.

The decision to appoint Umar as the chairman of the NA finance panel was taken last week during a meeting of the parliamentary party of the ruling PTI held at the Parliament House. Umar had later a private newspaper that he himself had asked the prime minister to be given the committee’s chairmanship “because I have some expertise in financial matters which I want to utilise”.

He assured the committee today that no negotiations had taken place with the IMF regarding Pakistan’s defence budget.

The NA Secretariat’s special secretary welcomed the members and briefed about the procedure regarding the election of the chairman.

Accordingly, Asad Umar was unanimously elected as the chairman of the NA’s Standing Committee on Finance, Revenue and Economic Affairs.

The special secretary congratulated the newly-elected chairman on behalf of the NA speaker, secretary and assured him of complete support in the effective and efficient functioning of the committee.

The chairman expressed his gratitude to the members for posing their confidence in him and assured them of running the business of the committee with consensus.

The members, while appreciating the views of the chairman, assured him of their support in the process of legislation.