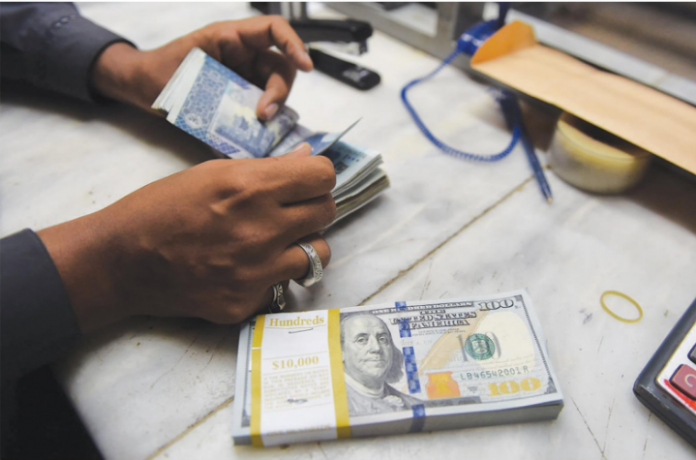 KARACHI: The US dollar reached an unprecedented high of Rs152 in the open market on Monday, as the rupee maintained its downturn on the third successive working day, closing at a new all-time low of Rs149.65 in the inter-bank market on Monday, according to the State Bank of Pakistan (SBP).

Before the day’s closure, rupee hit 152 to the greenback for the first time in history.

Cumulatively in the three days, the local currency has lost 5.84%, or Rs8.26, from Wednesday’s close of Rs141.39 under the new round of depreciation.

The International Monetary Fund (IMF) has conditioned to let the market forces decide rupee-dollar exchange rate going forward. Implementation of this condition is a must to acquire the IMF board’s final approval for its 39-month long loan programme worth $6 billion for Pakistan.

The government entered the IMF programme on May 12 and the IMF board is expected to meet sometime in June.

Adviser to Prime Minister on Finance Abdul Hafeez Shaikh said last week that it is the State Bank of Pakistan’s (SBP) monetary policy committee, which is responsible to determine rupee-dollar exchange rate keeping in view the foreign currency demand and supply situation in the country.

There was speculation in the market that the rupee may drop to 165-170 to the US dollar under the current cycle of depreciation.

Earlier in the previous six rounds, the central bank had let the rupee depreciate by a staggering 34% since December 2017 to Wednesday’s (May 15, 2019) close of 141.4 in the inter-bank market.