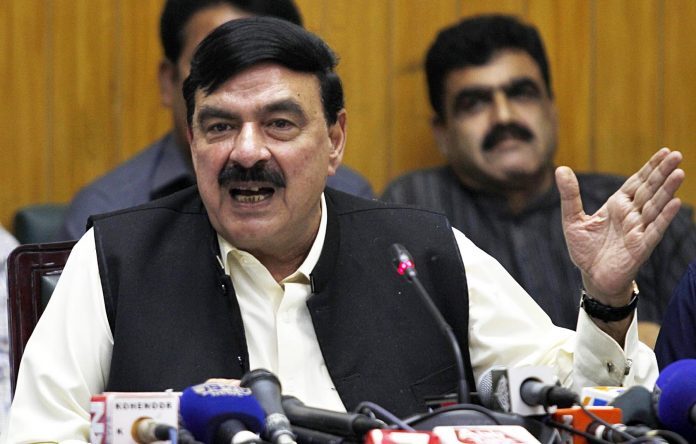 LAHORE: Railways Minister Sheikh Rasheed Ahmad said on Saturday that no new train would be launched until the completion of Main Line-1 (ML-1) project, which would be constructed with the help of China.

Addressing a press conference at the PR headquarters, the minister said that he had ordered the department to upgrade at least 10 coaches per week so that challenges pertaining to the shortage of passenger coaches could be overcome.

He said that 100 about-to-retire drivers have been given a two-year extension in their service period, adding that during the said two years, as many as 347 undertraining drivers would complete their training.

The minister also announced the cancellation of leaves for all railway officers “so that smooth operations of the rail network could be ensured during rainy weather”.

Sheikh Rasheed said that he was visiting the most deprived and mishandled railway division, Sukkur, on Tuesday as the “division remained neglected during the previous tenures”.

He said all the institutions have appreciated the performance of the railways’ ministry as six to seven million passengers were added to the network despite an increase in freight, which was due to the government policies.

He also announced the construction of two new washing lines in Karachi and Lahore on an emergent basis.

On a query, the minister said that the possession of the Royal Palm Club has been taken over by the railways and a five-member committee, under the supervision of Railways CEO Aftab Akbar, would see the matters of the club.

“Issues of train timings will be settled by the end of next month,” the minister vowed, adding that he would present himself for accountability by the end of the working year in November.

On another question, he said the government would soon overcome financial challenges through its policies.

“Economic turmoil, price-hike and corruption are among the biggest challenges faced by the incumbent government. However, these challenges will be overcome in a few months,” he maintained.

Sheikh Rasheed said the United States has decided to support Pakistan after the historic visit of Prime Minister Imran Khan, adding that the United Kingdom prime minister was also a close friend of Imran Khan.

He said it was the PM who asked the US that war against Iran would be a blunder that could destabilise the entire region. “Such courage could only be expressed by an honest person.”

The minister informed that the PM has expressed his annoyance over a PTI delegation that met Jamiat Ulema-e-Islam Fazl (JUI-F) chief Maulana Fazlur Rehman. “The opposition is organising small public meetings at different places; it is not an issue for the PTI government,” he added.

Taking a jibe at the rulers, he said that all money-launderers have joined hands against the government. “The prime minister is firm that no concession will be given to the looters and plunderers.”

He held PML-N leader Marryam Nawaz responsible for the destruction of her party.