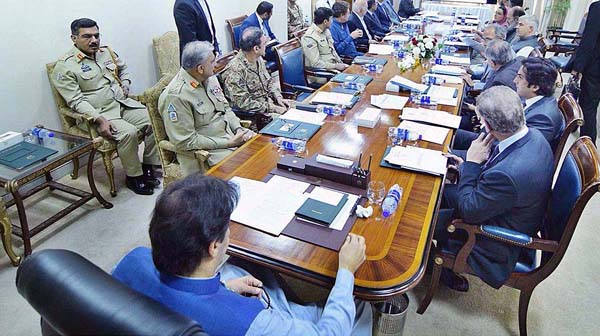 The National Development Council (NDC), during a high-level meeting chaired by Prime Minister Imran Khan, has made important decisions with regard to the ongoing development projects, a private media outlet reported on Thursday.

The participants of the meeting reviewed progress of various ongoing development projects, including Gwadar master plan and establishment of the China-Pakistan Economic Corridor Authority. They also discussed matters related to KP-FATA merger its development plan for the fiscal year 2019-20.

A briefing was given to the council’s members on making improvements in security arrangements, border management and establishment of state writ in Balochistan.

The briefing highlighted that Balochistan was kept unprivileged following the negligence of previous governments due to wastage of 45pc development budget, security challenges and misuage of resources.

It has been decided to expedite development work in various projects initiated in Balochistan, while effective steps would be taken to reduce the backwardness and increase the budgetary allocations for the next nine years.

The government will make concrete steps to raise the income of Balochistan by developing a better communication and infrastructure system.

On the development of coastal areas of the province, the council gave approval in principal for a port at Gaddani and establishment of a special economic zone at Hub.

Furthermore, the proposal for the development of eight landing sites at ports and promotion of local boat industry, including provision of 10,000 green boats, were endorsed.

It was apprised to the NDC members that Balochistan will be divided into four zones (Chagai Zone, Quetta-Duki, Khuzdar-Lasbella and Coastal Zone) and appropriate model will be put in place to encourage private investment in large-scale mining for the development of mines and mineral resources.

The government also reviewed the progress of oil and gas sector and briefed that efforts are underway develop 4 new blocks including Block-28, Zhob, Zorgarh, Jandran & Kohlu for exploration, in addition to carrying out seismic survey at 30 onshore sites.

The meeting was also briefed about various plans for improvement of agriculture and water-management in the province.

A major decision was taken for the constitution of CPEC Authority to ensure fast track implementation of the projects.

Discussing development of Gwadar and Master Plan of the city, the forum approved the conceptual framework of Gwadar Special Economic District.