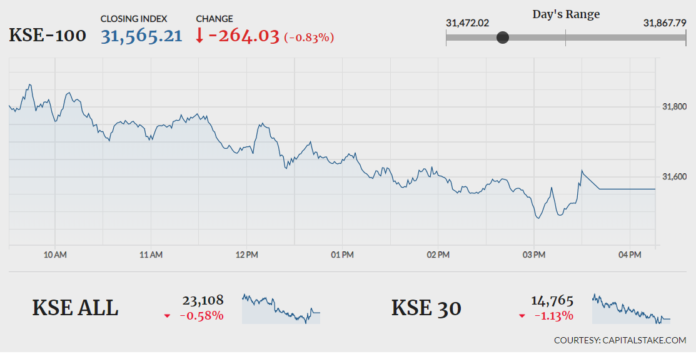 KARACHI: Bearish sentiments surrounded the Pakistan Stock Exchange (PSX) on Wednesday, as the indices headed south as soon as the session commenced. Foreign investors offloaded equity worth $3.39 million on Tuesday.

The overall volumes improved from 88.81 million in the preceding session to 103.66 million. K-Electric Limited (KEL +1.53pc) turned out to be the volume leader of the day, followed by Worldcall Telecom (WTL +16.13pc) and Pakistan State Oil Company Limited (PSO -0.17pc). The scripts had traded 14.90 million, 12.45 million and 6.96 million shares respectively.

Pakistan State Oil Company Limited (PSO -0.17pc) announced the financial results for FY19. A final cash dividend of Rs5 per share, along with 20pc bonus shares, was also declared by the company. Sales grew by 8.51pc but the company reported a decline in gross profit margin by -9.13pc. PSO’s financial cost increased by a massive 74.48pc, which lowered the earnings per share by 31.53pc (FY18 Rs39.52, FY19 Rs27.06).

Pak Petroleum Limited (PPL -0.45pc) also declared its financials for FY19. The company announced a final cash dividend of Rs2 along with 20pc bonus shares. Sales increased by 29.86pc YoY, while earnings per share improved from Rs20.15 in FY18 to Rs27.18 in FY19.

In a notification to the exchange, the management of Hascol Petroleum Limited (HASCOL -2.08pc) announced that the company’s subsidiary, Hascol Lubricants (Pvt) Ltd, has received a licence from the Oil and Regulatory Authority (OGRA) to start commercial operations of its lube oil blending plant. The plant has a capacity of 40,000 metric tonnes per annum.