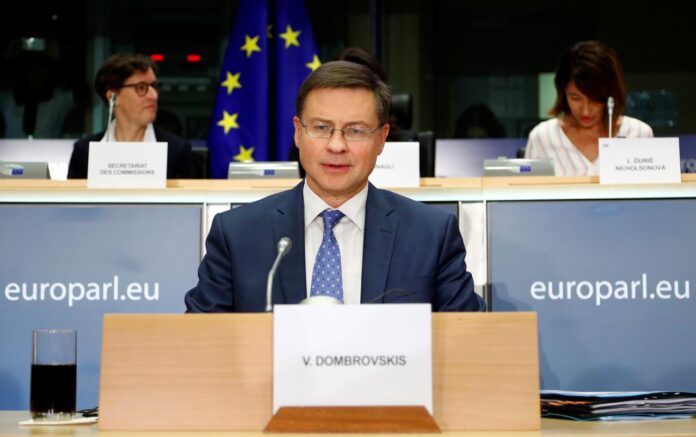 BRUSSELS: France and Germany have said that Libra, whose size would dwarf cryptocurrencies such as bitcoin, could limit their monetary sovereignty.

“Europe needs a common approach on crypto-assets such as Libra,” Valdis Dombrovskis told EU lawmakers in a confirmation hearing. “I intend to propose new legislation on this.”

The EU has no specific regulations on cryptocurrencies, which, until Libra was announced in June, had been considered a marginal issue by most decision-makers because only a fraction of bitcoins or other digital coins are converted into euros.

Dombrovskis has resisted regulating digital currencies in the five years he has served so far. He made it clear his change of heart stemmed from Facebook’s plans for Libra, a digital currency that “could have systemic effects on financial stability,” he told lawmakers.

The EU is now also pushing the G20 for global action on “stablecoins,” an EU document circulated last week said.

Facebook’s planned Libra is the best-known of the stablecoins – cryptocurrencies backed by assets such as conventional money deposits, short-term government securities or gold.

Libra’s scale would pose risks, Dombrovskis said, because Facebook’s millions of users in Europe would be able to pay with the new digital currency.

An EU Commission official said there was no timetable yet for proposing the new rules.

Dombrovskis said the crypto regulation should focus on defending financial stability, protecting consumers and tackling the risks of money-laundering using crypto-assets, which can easily cross borders.

Dombrovskis, a former prime minister of Latvia, said the EU needed to rethink its defences against financial crime.

He also said he saw “a lot of merit” in shifting some supervision to an EU body, without clarifying whether that meant setting up a new anti-money-laundering agency or beefing up existing agencies.

In his address to lawmakers, Dombrovskis also pledged a “sustainable Europe investment plan” to unlock €1 trillion ($1.1 trillion) of private and public green investment over the next decade.

He said the plan would be based on guarantees and funds provided by the EU budget and the European Investment Bank, although most of the money is expected to come from the private sector.