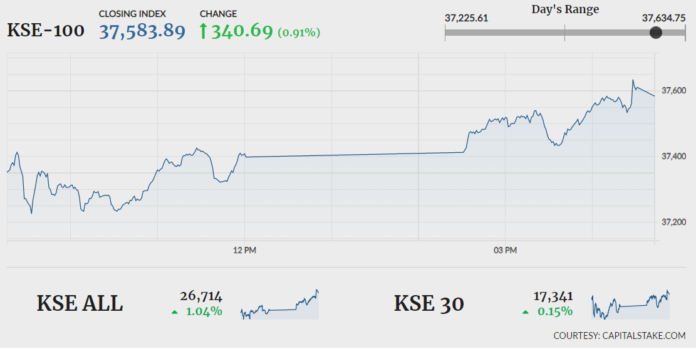 KARACHI: Keeping up with the growth momentum, the Pakistan Stock Exchange (PSX) ended the week on a positive note, as the indices marched forward while volumes inflated further.

The benchmark KSE-100 Index’s one-week return was recorded at +4.54pc. Foreign investors broke their six-day buying streak and closed as net sellers on Thursday with a net outflow of $0.107 million.

According to latest data released by the State Bank of Pakistan, the country’s liquid foreign exchange reserves closed flat for the week ended November 7, 2019. Reserves stood at $15,502 million as against $15,518 million on November 1, 2019. Moreover, Pakistan’s trade deficit fell by 34pc in the first four months of the current fiscal year and was recorded at $7,776 million. Imports of the country contracted by 19pc, whereas exports posted a minor gain of 3.81pc.

In a notification to the exchange, Service Industries Limited (SRVI +5.00pc) announced that the company would set up a greenfield project to undertake manufacturing and sale of truck & bus radial category of tyres in Pakistan to serve domestic and foreign markets. The company shall enter into a joint venture with Chaoyang Long March Tyre Co Ltd (LM) of China & Myco Corporation of Pakistan (MC). The investment would be worth $30.6 million.