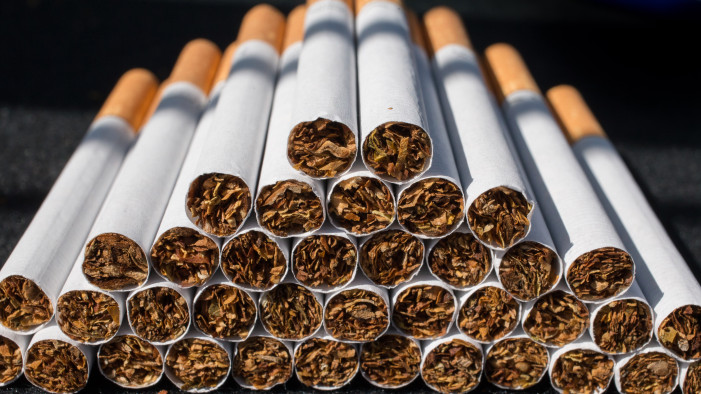 Could the answer really be as simple as an app? For decades now, the tobacco industry has lobbied the government of Pakistan to crack down on smuggled cigarettes and other tobacco products, and the government has been inclined to help them, in large part because the government itself derives an inordinate amount of taxation revenue from the industry.

First, some context is in order.

Yet the industry punches above its weight when it comes to its importance to Pakistan’s taxation system. In the fiscal year ending June 30, 2019, the tobacco industry accounted for Rs117 billion in taxes paid to the government, according to data from the Federal Board of Revenue (FBR), or about 3.1% of total revenue collected that year.

Of that amount, Rs90.9 billion was paid in the form of federal excise duties and Rs26.1 in the form of sales taxes. Tobacco may be the most heavily taxed sector in Pakistan. Despite there being several companies larger than it, Pakistan Tobacco Company – the local subsidiary of British American Tobacco and the largest tobacco company in the country – paid more in taxes than any other entity in the country.

During the calendar year 2018, Pakistan Tobacco paid Rs92.2 billion in the form of excise duty, sales tax, custom duties, surcharges and income tax, more than any other single company.

Yet, as much as the government collects in taxes on the cigarette industry – which operates as a virtual duopoly between Pakistan Tobacco and Philip Morris Pakistan – there is considerable evidence to suggest that, were they able to crack down on smuggling, the government could collect even more.

Experts in the field frequently estimate that the total proportion of cigarettes consumed in Pakistan that are smuggled is close to 24%, which implies an estimated revenue loss of Rs20 billion for the government. Needless to say, the FBR has considerable motivation to try to solve the problem.

There is also a foreign affairs angle to the matter. Pakistan is a signatory to the Framework Convention on Tobacco Control (FCTC), which the country ratified on November 3, 2004 and also acceded to the FCTC Protocol to Eliminate Illicit Trade in Tobacco Products on June 29, 2018.

Pakistan is one of 181 countries that signed on to the FCTC since 2004 and is among 56 parties that have ratified the protocol to eliminate illicit trade in tobacco products. The protocol stipulates that any tobacco track and trace solution shall be independent of the tobacco industry. As a signatory to the FCTC, Pakistan now has to establish a project to implement a ‘Track and Trace System’ for all tobacco products that are manufactured in, imported into or are transiting through its territory. 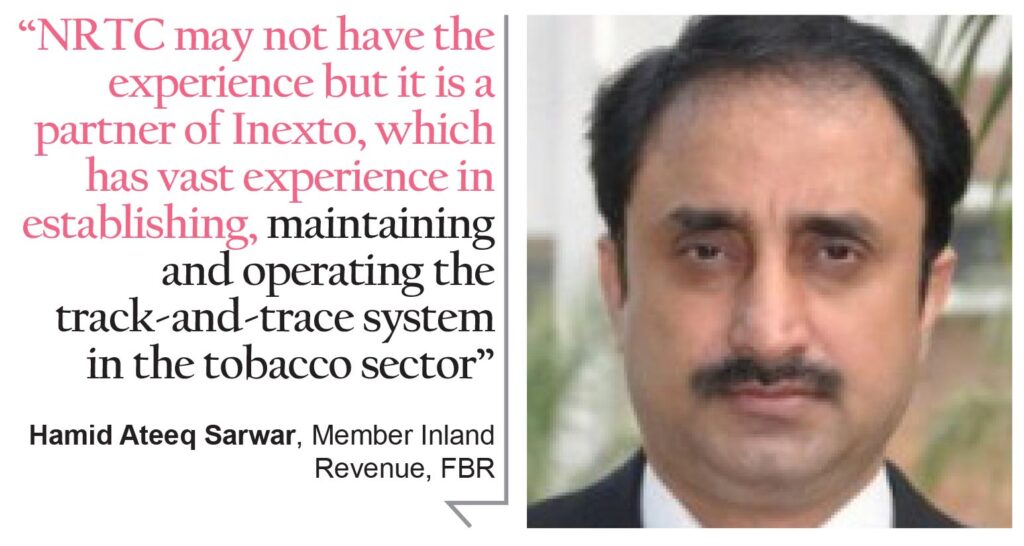 Such a measure is necessary not only for monitoring and protecting the government’s revenue proceeds from this industry but also to address the illicit trade in tobacco products taking place within Pakistan’s borders. Once established and running, this ‘track-and-trace’ system is also likely to become part of a regional, or global, international track-and-trace regimes for tobacco products.

Based on guidelines laid out by the International Monetary Fund (IMF), the FBR conducted an auction to hand out the licence for setting up a track-and-trace system in Pakistan, which would be designed to build a technology-based solution to help monitor the illicit trade of tobacco products into the country.

The auction attracted interest from leading technology providers in the field, including Swiss security technology firms SICPA and Inexto, the UK-based DeLaRue and OpSec, US-based firms Authentix and SURYS, among others.

NRTC is owned by the Ministry of Defence Production and manufactures sophisticated military grade communication equipment for the Pakistan Army, and also exports such equipment to a number of countries including Saudi Arabia, Nigeria, Sri Lanka, and Malaysia.

After the bidding process, the FBR declared the consortium the winner, and granted a license to the local component of that consortium, the NRTC. The initial contract will last for a period of five years and mandates the company to establish, maintain and operate the entire track-and-trace system for the tobacco sector. This license was issued at a price of Rs731 per 1,000 stamps.

In a country that consumed close to 40 billion smuggled cigarette sticks in 2018, that could amount to a substantial amount of revenue for the government as well as the company providing the solution.

The new solution is expected to allow the tracking and tracing of all legitimate products through a mobile app, not only by the FBR but also by the consumers. If any product is scanned by the app and found to be smuggled, counterfeit or “duty not paid “, the product can be flagged and the government can remove it from the market and perhaps even destroy it.

Individuals involved in dealing with such flagged products can also be charged with smuggling and tax evasion, in line with Pakistan’s criminal code.

The state-of-the-art mobile app that the NRTC has brought as part of the solution is supported on both iOS and Android mobile operating systems and is available via both the Apple App Store and Google Play Store for free.

In addition, surveillance cameras will be installed on manufacturing sites, and once the products have been verified, they will be stamped and will continue to be monitored from FBR control rooms.

The solution is simple to use, secure and real time. It has two unique features designed specifically for Pakistan: the track-and-trace digital code and a covert digital fingerprint that provides full authentication. The mobile solution is available to all parties. The track-and-trace solution is currently used in Russia, Switzerland, Burkina Faso, the European Union (EU), Mexico, and Lithuania. 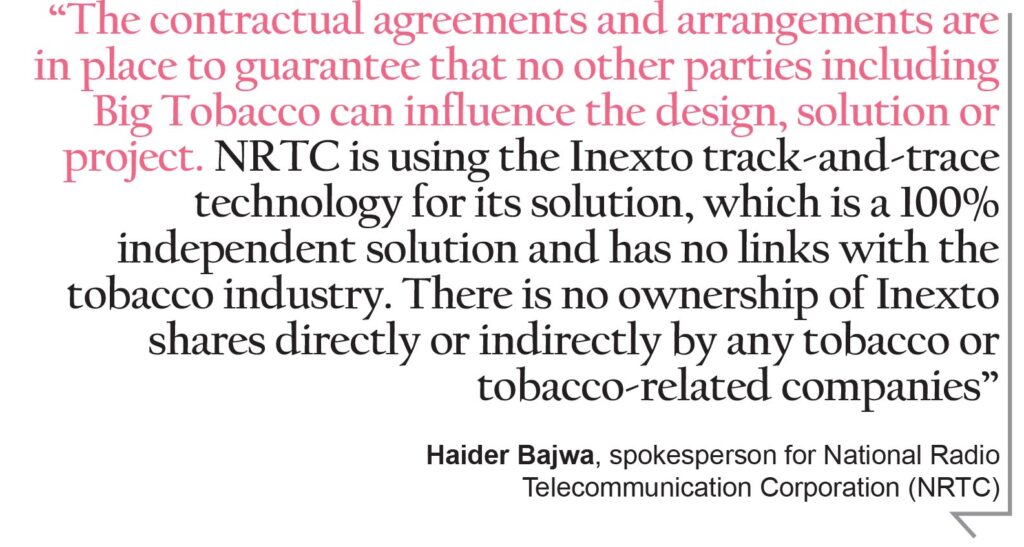 Haider Bajwa, a spokesperson for NRTC told Profit in an interview that the contractual agreements and arrangements are in place to guarantee that no other parties including Big Tobacco can influence the design, solution or project. He said that the NRTC is using the Inexto track-and-trace technology for its solution, which is a 100% independent solution and has no links with the tobacco industry.

“There is no ownership of Inexto shares directly or indirectly by any tobacco or tobacco-related companies,” he said.

Sources familiar with the matter explain that the use of the NRTC system combined with a structured enforcement strategy will help reduce smuggling. It will also enable the law enforcement agencies to keep a real time check in the field, verify and confirm the providence of any products, determine the legitimacy of the said products, and confiscate or destroy them if needed.

In addition, all checks and information will be available to the FBR control rooms for review and analysis. “The whole process is designed to comply with the FCTC protocol of the World Health Organization (WHO),” said Haider. “By stopping illicit trade, illegal sale of tobacco will be subsequently controlled.”

So, what’s the problem?

NRTC says it rightfully won this bid. So who has a problem and why?

Malik Imran, a representative of the Campaign for Tobacco-Free Kids, a non-profit organisation that lobbies against the tobacco industry, alleged in an interview with Profit that the award of the license by the FBR lacked transparency. He said that the FBR, while granting a license for the establishment and operation of the entire track-and-trace system for tobacco products, has “ignored technical assessments” and has “granted the license to the lowest financial bidder”.

“The FBR had amended the rules to facilitate a particular company,” said Imran, adding that the board compromised the technical capabilities for the track-and-trace license by choosing the lowest financial bidder with no past experience in establishing such systems.

He claimed that Inexto, the cloud-based global tracking system and brand protection solution, which is partnered with NRTC, also has business links with Philip Morris International, the parent company of Philip Morris Pakistan.

He said that Philip Morris had obtained the track-and-trace services of Inexto for its own surveillance. “NRTC won the bid because of its association with Inexto, which is a front company of the tobacco industry and receives business from the said international company,” Malik Imran said. “FBR should make the technical assessment (weighted average) of the participants public.”

Malik Imran is not alone in making that allegation. In 2018, a study from the Tobacco Control Research Group at the University of Bath, using a range of sources including internal documents and whistleblower testimony, claims the industry is now going to elaborate lengths to control the global track-and-trace system that the United Nations has said must be put in place to counter smuggling, according to a report published in June 2018 in The Guardian, a British newspaper.

The report specifically cited Inexto as being effectively owned by Philip Morris.

When Haider Bajwa was questioned about the track-and-trace license being awarded to NRTC, he responded by saying that the corporation along with its consortium partners has won this project on true merits and experience, and is capable of delivering the expected results within the stipulated time frame given by FBR. He said that the NRTC solution will cost Rs3.5 billion less as compared to the 2nd lowest responsive bidder – NIFT.

He said that if the technical and financial score is combined, the NRTC would still score the highest amongst all bidders. This was subsequently confirmed by the FBR as well.

“The revenue board intends to increase the tax revenue by approximately Rs20 billion to Rs30 billion annually with the implementation of the track-and-trace system for tobacco products,” he added.

Sources familiar with the tobacco industry in Pakistan believe that owing to the nature of business of NRTC, it is perhaps the only local company amongst all 13 applicant consortiums that possesses the needed expertise and required security protocols of military standards. This would ensure that the highly sensitive track-and-trace data would be protected with highest military grade standards and will not be shared with any foreign company, unlike in the case of other competitors.

They said that NRTC, with its local hardware partners, have prior implementation experience of track-and-trace and hardware in Pakistan’s tobacco, pharmaceuticals, and fast-moving consumer goods (FMCG) industries. No other consortium has relevant and necessary prior local experience in implementing or maintaining track-and-trace systems.

“NRTC may not have the experience but it is a partner of Inexto, which has vast experience in establishing, maintaining and operating the track-and-trace system in the tobacco sector,” he added.

If the industry experts are to be believed, the consortium appears to have fairly won the bid. Nonetheless, Inexto’s alleged ties to Philip Morris suggest that the government’s own rules as well as international guidelines were not necessarily followed. It remains unclear as to whether that will have an effect on the efficacy of the system itself, though it does cast some shadow of doubt over the transparency of the process.