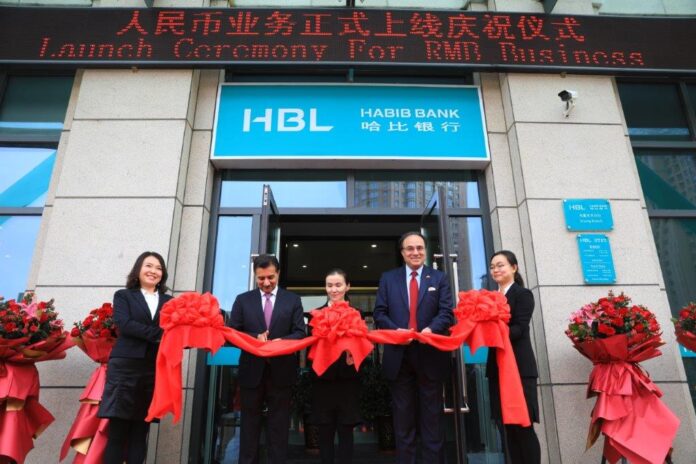 This makes HBL the first bank from Pakistan, and one of the three banks from South Asia and the MENA region, to do so.

The bank’s branch in Urumqi, in the Chinese province of Xinjiang, formally commenced RMB business on 7 November 2019, after obtaining regulatory approval.

The branch was opened in March 2017 and acquired the RMB licence in June 2018. It is the only foreign bank branch operating in the northwestern province.

HBL Chairman Sultan Ali Allana and HBL CEO Muhammad Aurangzeb were present in Urumqi to formally commence the RMB business. Members of the HBL’s board of directors and other executives were also there.

“We are doubling up our business in China and it will soon become a second home market for HBL. For our branch in Urumqi we got the RMB licence in the shortest possible time, so we are very grateful to the regulators in China,” said Aurangzeb.

Speaking on the occasion, Allana said, “We want to be an integral part of Chinese economy as well as the country. I am hopeful that in the coming years, this foundation can give us the springboard to become a bank of relevance in China in the coming decades.”

HBL has also applied to upgrade its Beijing representative office to a branch. The licence is expected to arrive in the next two to three months, subject to regulatory approval.

This latest development is part of HBL’s recent efforts to expand in China. Last week, Bloomberg reported that HBL was looking to tap more business under President Xi Jinping’s Belt and Road Initiative (BRI). HBL is currently involved in around $6 billion of Pakistan projects under the BRI.

HBL acquired stake in Pakistan’s first coal mining venture, one of the main Belt and Road projects, with Chinese companies in the Thar desert. HBL was also the first Pakistani lender to open a branch in Gwadar, Balochistan, where China is developing a port.

In the third quarter of 2019, HBL also signed an agreement with Ufone, extending a bilateral Trade Finance Facility in RMB for the first time. This was done to facilitate the import of cellular network equipment through Huawei Technologies Ltd.