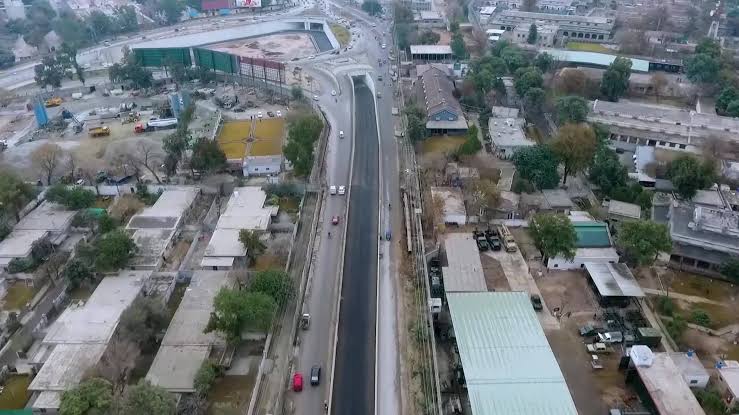 The lunatic, the lover and the poet are of imagination all compact, the bard teaches us. The same can be said about the anchor, the politician and the analyst. Each sees devils, and Helens and heavens where they please, making mountains out of molehills.

The cast and characters of the latest fast-paced comedy of errors we have on our hands includes Khyber-Pakhtunkhwa Information Minister Shaukat Yusufzai, Geo News’ lead anchor Shahzaib Khanzada, and the army of Whatsapp and Twitter analysts providing free-of-cost but unwarranted hot takes.

It all started with the Peshawar Bus Rapid Transit (BRT) project, and if the beginning point is anything to go by, it was always going to be a bumpy road (pun intended) for the ruling Pakistan Tehrik-e-Insaf (PTI) and their loyalists. After years in the opposition spent deriding Punjab projects such as the Metro Bus and propagating ‘jangla bus’ vitriol, the PTI during their previous tenure in KP from 2013 through 2018 decided to build their own shiny bus service running through the heart of Peshawar.

With a Rs55.8 billion price tag, the project was to be the most expensive BRT system in Pakistan, and 88% of the financing was being done by the Asian Development Bank (ADB). The ADB promised a long term, 20-year loan of $350 million to the KP government for the project, which would be converted into Rs48.8 billion to spend on the project.

The project was inaugurated in October 2017, and has since then not seen the announcement of a completion date, with the estimated time of completion being delayed time and again.

Since October 2017, reports by the KP government itself has seen accusations of upwards of Rs7 billion in kickbacks, and the current PTI Chief Minister in the province, Mehmood Khan, has expressed his reservations regarding the project, saying it was initiated with zero planning. Earlier this year in May, the ADB also sent a list of 30 observations to the KP government, telling them the way the project was currently being undertaken was unacceptable.

It goes without saying that things are bad. The project is not just an eyesore, but an eyesore that has caused significant pain to Peshawar locals in the form of traffic congestion, loss of business and even life. While the project is undoubtedly politicised by now, the first non-partisan voices of sanity have already started suggesting that it may be time to start dismantling the whole monstrosity.

So when KP Information Minister Shaukat Yusufzai had to answer questions regarding the cost being incurred by yet another delay in the project, he probably would have rather faced another Facebook Live press conference with the cat filter on. (Oh, did we forget to mention that Shaukat Yusufzai is that same one whose press conference went viral all the way around the world? Yes, it is the same person.)

Except this time the minister did have some semblance of an answer… sort of.

The most recent delay has meant that the loan from the ADB that would have been converted to rupees at around Rs104 to the dollar would now be converted at Rs155 to the dollar, theoretically giving the KP government more spending power – at least in rupee terms – than they would have had last year.

And according to the minister’s own vague, unexplained calculations, the costs incurred (which he in passing estimated at around Rs3 billion) by the delay were actually less than the benefit that the higher dollar rate was providing. And that is where our story begins.

On paper, it makes sense. Admittedly, on a very microscopic, coincidental, not-really-the-point kind of paper, but it is an argument that could be made. Theoretically. Yet somehow it turned out to be a cat-ears level scandal for Yusufzai.

Once again, on the very convoluted piece of paper, it has to be said that the ADB did indeed granted a long term loan to the KP government, and one that does indeed have a repayment period of 20 years, and the first payments for which do not start until five or six years after the first disbursement. Which means that on some level or the other, there was indeed a cash flow benefit to the government in converting dollars to rupees.

Somebody on the KP government team must have undoubtedly pointed this out thinking themselves quite clever. Whether it was out of desperation or sheer lack of understanding or both, Shaukat Yusufzai decided to roll with it.

The devaluation of the rupee has nothing to do with the BRT project, nor was it engineered to provide any such benefit. The delay was not planned in tandem with the devaluation either, but the coincidence seemed happy enough to the spokesperson to tout it in press conferences.

By this time, the Twitterverse was already up in arms, and clips of Yusufzai were already making the rounds on WhatsApp. Somewhere in a news studio, Shahzeb Khanzada was smelling blood. A lot is said about the state of the media in Pakistan, especially the electronic media. And while ‘they’re-all-taking-money’ narratives are less than desirable, most anchors are shouters and rabble rousers.

Shahzeb Khanzada is different. On the spectrum of news anchors, he has slowly become a standard. With a robust research team to back him, he asks tough questions and does not back down with half smile answers but persists. So when Shaukat Yusufzai came out on the show, it was always going to be a grilling.

The question he asked were reasonable. If it was indeed such a desirable situation, how would the government pay back the loans, which the ADB would want back in dollars and not rupees? There was an answer to this, but Shaukat Yusufzai floundered. The best route was to admit that this was a rather shaky silver lining. What he did instead was speculate that by the time the loan was to be returned, the rupee might have gone up to Rs75 per dollar. At this point, you could almost hear the music and Robert E Weide credits roll.

The video started circulating, as it was bound to. But where there is usually cheering from Khanzada’s usual fans and discontent but embarrassed murmurs or stony silence from PTI stalwarts, something else started to happen as well: the WhatsApp groups began to ping.

As many of the readers might know, and many others might be horrified to discover, there exist numerous WhatsApp groups with hundreds of members each where there is regular, often vicious debate. The members of these groups are rarely friends or family, and the entire purpose is essentially to discuss such tidbits.

But the debate within the groups raged, and these WhatsApp analysts soon raised some valid points. Shaukat Yusufzai was unable to defend himself at the point of Shahzeb Khanzada’s sharp questioning, but that does not remove the fact that he had originally had a point.

In whatever small, accidental way, the dollar rate had helped the government to an extent. Shaukat Yusufzai had proven his shaky grasp on economic concepts, but the onus shifted to Shahzeb Khanzada, who was found lacking for once in his research, and in perhaps being too hard on a minister admittedly clutching at straws.

This got some excitement from the PTI’s side, and then came the best bit. Debate on these WhatsApp groups reached a point where it began to be claimed that since the loan was to be returned in dollars, it was going to be dollars that would be earned through trade and remittances, and would thus have nothing to do with exchange rates.

This was just bad economics. Dollars are earned, but not by the government. The only legal tender they have are rupees after all, and that is the currency they are backing. So if a company like Nishat earns dollars and brings them in to Pakistan, it will convert them to rupees by selling them to other willing market participants in exchange for those dollars at whatever the rate of the dollar in rupees is at the time.

The same goes for remittances. So for all intents and purposes, these ‘earned’ dollars are bought at the market rate and exchange rate very much continues to be in play. So once again, it went back to being very flimsy straws that the KP government was clutching at.

The state of the disaster

In the gaffe that has caused so much hue and cry on all sides, with no one understanding completely and being both right and wrong at the same time, what has been lost is the pain and discomfort that the BRT project continues to cause.

Peshawar has been ripped up at the belly and it continues to bleed as the project sets in and festers like an infection. The extent to which it has been mismanaged goes well beyond gross neglect, and it is a shock that it has not become a larger issue than it has.

But even if we were to remove the comedy of errors surrounding the claims made by the KP information minister, and take it completely at face value, it is a frivolous case to make. Even if the government admits that it is a happy coincidence, it is only so much posturing and gloss. Even with the benefit caused by the high dollar rate and the delay, the delay has at the end of the day been a loss making machine.

More important even than that has been the continued pain that it has caused to those losing business and time because of the mess and traffic caused by the project. It is also a case in astounding incompetence and relentless stubbornness in the face of what has clearly proven to be a mistake. That, at least, cannot be explained away by a happy coincidence.