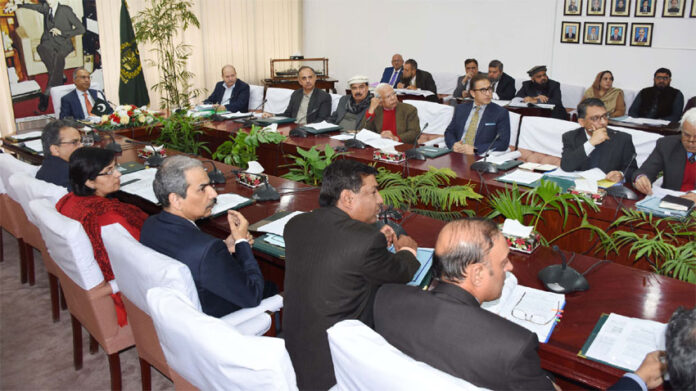 ISLAMABAD: The Economic Coordination Committee (ECC) on Monday approved a grant of Rs6 billion as subsidy for the Utility Stores Corporation.

The approval to the proposal submitted by the Ministry of Industries and Production was granted by the ECC in its meeting held with Adviser to Prime Minister on Finance and Revenue Dr Abdul Hafeez Shaikh in the chair.

The ECC’s decision was in pursuance of the prime minister’s directive (dated 8th November 2019) regarding the facilitation of USC in the procurement of essential commodities, including flour, sugar, ghee/oil, pulses and rice.

The ECC also constituted a committee, to be headed by Adviser to PM on Commerce Abdul Razak Dawood, to monitor the disbursement of subsidy and ensure the provision of commodities at a fair price to the poor segment of the society through a transparent and effective mechanism.

Meanwhile, the committee approved a technical supplementary grant equal to Rs4.05 billion worth funds, which were lapsed during the financial year 2018-19, under the Sustainable Development Goals Achievement Programme (SAP).

As per the proposal, submitted by the Cabinet Division, the reallocated funds would be used under the SAP to make specific interventions as per the demand of the community in line with the UN Conventions.

The ECC also granted ex-post facto approval to a proposal by the Ministry of Interior for a technical supplementary grant amounting to Rs100 million for making security arrangements in the federal capital during October 2019. However, the committee expressed its concern on the manner in which ad hoc arrangements were made as they were costly and disruptive for the business sector and for the perception of the country.

Approving a proposal submitted by the Ministry of Narcotics Control for a technical supplementary grant of Rs7.904 billion as operational cost for Anti-Narcotics Force, the ECC instructed that such proposals involving transfer of money from external sources should be taken up by the Ministry of Finance itself instead of the ECC and that the release of money should be ensured in a smooth manner.

Moreover, the committee approved a Finance Division proposal for the submission of a supplementary budget statement (addendum), amounting to Rs170.418 billion, from the Federal Consolidated Fund to the National Assembly, as per Article 84(a) of the Constitution.

The ECC approved another proposal from the Finance Division for laying before the National Assembly the supplementary demands for grants and appropriations for the financial year 2018-19.

The committee also took up a proposal by the Ministry of National Food Security and Research for exemption of 5pc sales tax on cottonseed cake and after a detailed discussion on the issue, referred the matter to the Finance Division for examination.