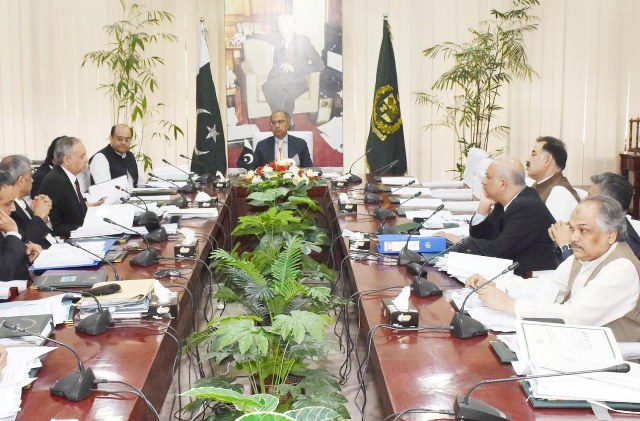 ISLAMABAD: The federal cabinet’s Economic Coordination Committee (ECC), which met with Adviser to Prime Minister on Finance and Revenue Dr Abdul Hafeez Shaikh in the chair on Tuesday, approved an amendment in SRO 192(1)/ 2019 (dated 11th Feb 2019) extending exemption from the regulatory duty to export-oriented units.

Meanwhile, the ECC again deferred the Petroleum Division’s proposal to increase in the prices of natural gas, stating that the decision would not be rushed into.

The committee also suggested that the division’s recommendations regarding gas tariff hike should be improved.

It was also decided that the measures to save the public from the adverse effects of gas prices hike should also be put forth and an alternative be presented in this regard.

The ECC also considered and approved the grant of Rs153.25 million from the budget of the Ministry of Finance, as a technical supplementary grant for the Ministry of Interior, for compensation to the victims of suicide attack at District courts F-8, Islamabad, which took place on 3rd March 2014. The Finance Division supported the proposal in compliance with the orders of the Supreme Court of Pakistan.

Moreover, the ECC approved the creation of a Digital Media Wing in the Ministry of Information and Broadcasting. The purpose of the wing shall be to effectively counter the fake/libelous news and highlight the development agenda of the government. The ECC directed the MoI&B to move ahead with the establishment of the wing by using its already available resources.

The ECC also gave approval to the transfer of funds amounting to Rs31.5 million in equivalent foreign exchange from the Ministry of Interior to the Ministry of Defence as technical supplementary grant for the maintenance of Cessna aircraft.

The committee meeting was attended by federal ministers of national food security and research, railways, energy and privatization ministries.