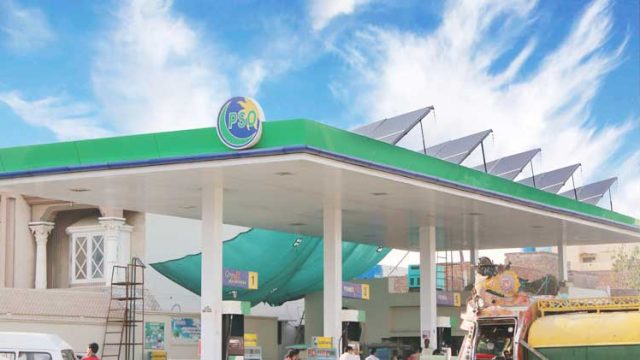 ISLAMABAD: The Pakistan State Oil (PSO) is currently facing a default risk in its local and international payment obligations, which may hamper jet fuel supplies to defence forces and local and foreign airlines.

According to statistics available with this scribe, PSO is currently facing liquidity crunch due to mounting receivables amounting to Rs335.7 billion from the power sector, Sui Northern Gas Pipelines Limited, Pakistan International Airlines and the federal government (as of Dec 15, 2019).

Owing to the devaluation of the local currency, the state-owned oil giant is also bound to pay additional Rs28 billion to the foreign banks on account of loans it had earlier obtained on the instructions of the finance ministry, triggering default risk.

Further, an overdue amount has been impairing the PSO’s ability to ensure uninterrupted energy supplies in the country.

The PSO’s board of management (BoM) chairman has already brought the matter in the notice of the finance secretary.

According to documents, the Petroleum Division informed the cabinet’s Economic Coordination Committee (ECC) on January 8 that the Finance Division had earlier advised the oil-importing companies to explore the possibility of financing long-term arrangements from the banks and financial institutions involved in their import plans.

And, in case such financing facilities require extra costs and risk to be borne by the companies, the federal government is committed to defraying such costs and risks.

Following the Finance Division’s directions, coupled with the advice of Petroleum Division, the PSO had been utilizing FE-25 loans from local and international banks operating in Pakistan since 2013.

To date, the PSO has suffered a net exchange loss of Rs28 billion on such loans due to devaluation of Pakistan rupee vis-à-vis US Dollar, the documents revealed.

The Petroleum Division had further warned the ECC that there was a risk of default by PSO in its local and international payment obligations due to which jet fuel supplies might get hindered for defence forces and local and foreign airlines.

A delay in the reimbursement of exchange losses on FE-25 loans may further aggravate the situation.

The Petroleum Division had sought the provision of Rs28 billion to improve the liquidity position of PSO and avert any untoward situation.

Sources privy to the development told this scribe that the ECC had directed the Finance Division to consider the allocation of Rs28 billion in favour of PSO from the next financial year.

They said the government had advised PSO and PARCO oil refinery to obtain loan from foreign banks to ensure the import of petroleum products and crude oil.

PSO has been allowed to obtain loans from foreign banks in dollars equivalent to Rs800 billion annually to ensure the import of petroleum products, sources added.

They further said the government had granted the permission ostensibly to reduce pressure on foreign exchange reserves, adding, this loan facility, on the other hand, is now proving harmful to PSO as the petroleum and finance divisions have so far not resolved the risk of default.